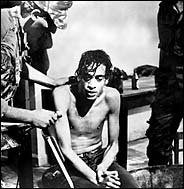 "Lose moral legitimacy, lose the war." This quote comes from a document recently reviewed by Slate magazine. Doing things in a war that most people find morally repugnant will cause you to lose your moral authority and it will erode your support. In the end it will give victory to your enemy. The message is clear for those responsible for rendition, torture, Abu Ghraib, imprisonment without trial and so many other moral failures. The authors point out that the French lost Algeria in part because their commanders condoned torture.

What is the document? It is the U.S. Army's new field manual on counterinsurgency wars.

Who are the authors of this limp wristed liberal rubbish? Well, the lead author is that well known softie, Lt. Gen. David Petraeus, former commander of 101st Airborne Division in Iraq.