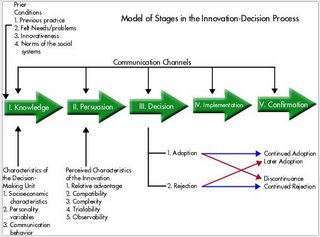 Firefox usage is increasing according to these articles [1, 2]. This seems like encouraging news, but what I find strange is the very slow rate at which Firefox is being adopted. Internet Explorer was never much good to start with, and is now almost five years out of date. However, it still has about 83% of the global market. In any rational world its market share should now be under 20%. It should really be zero but some people will have to use IE at work, because their employers have not implemented Firefox.

Even so, the slow rate of innovation diffusion is strange. Information is supposed to spread faster on the internet, and the browser is the main tool that people use to access information on the internet. Why haven’t more people changed to what is clearly a vastly superior product?

The other thing I find strange is the way in which Firefox adoption differs between countries. The adoption rate in Germany is almost 40%. In Australia it is 24% and in Italy it is over 20%. In the UK it is less than 14%. Why the differences? The take-up rate should be the highest in the USA and UK because it is an Anglosphere product. What has caused a higher rate of innovation diffusion in some countries? Why is the rate so high in Germany?

You could ask the same questions about RSS usage. Why haven’t more people started using feeds? Despite RSS offering major benefits less than 5% of internet users are subscribing to feeds. The rate of innovation diffusion is astonishingly slow. Yet RSS has been well published. Look at the number of web sites that have RSS feeds, and the mainstream sites, such as the BBC, that have detailed explanations of how RSS works.

A lot of new services are being made available on the internet, but if you look at the statistics, it is the same 50-60,000 people who are using these. The great majority of internet users are just sticking with a few familiar products and ignoring all the innovations.

Ralph Waldo Emerson is quoted as saying, "Build a better mousetrap, and the world will beat a path to your door."

A more accurate saying would be, "Build a better mousetrap, and most people will ignore you."

Email ThisBlogThis!Share to TwitterShare to FacebookShare to Pinterest
Labels: firefox