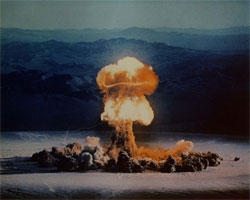 During the Cold War  the possibility of a nuclear attack on Britain was very real.

In 1980 the British Government ran a civil defence exercise called Square Leg. It was based on their best guess as to what would happen in a nuclear war and it assumed that in a Soviet attack 150 nuclear weapons, totaling 280 megatons, would fall on Britain. It was estimated that this would kill 29 million people and seriously injure 7 million.

In 1981 the Campaign for Nuclear Disarmament published a map based on the Square Leg scenario. 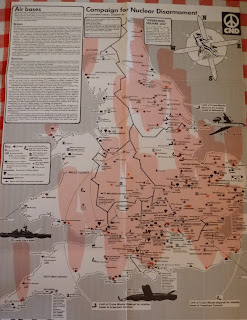 This map identifies military bases [many of them American], secret bunkers and probable targets.  The pink shading show areas likely to be contaminated by radiation. 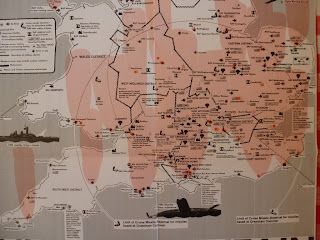 On this map you can clearly see the secret government bunkers at Portland, Kidderminster, Cambridge and the really big one at Corsham Quarry. 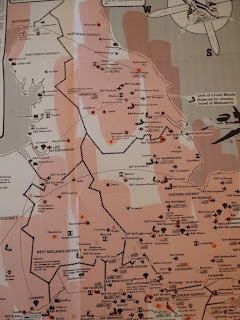 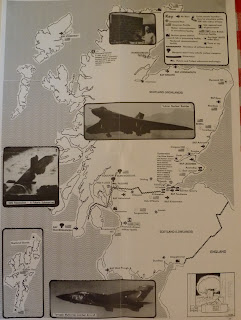 Scotland had its share of prime nuclear targets. The map below shows mushroom clouds over the nuclear weapons store at Glen Douglas and the nuclear submarine base at Faslane. At the time the US Navy used to base Polaris missile submarines at Holy Loch so that would also have been a target. After they had been attacked and bombs dropped in the Clyde to catch fleeing missile boats there would not have been many people left alive in Glasgow.

There were secret government bunkers at Barnton Quarry [regional seat of government for Scotland,  Kirknewton and Anstruther [now open to the public and worth a visit]. The people who drew the map didn't know about all the government hidey holes.  Some only emerged years after the end of the cold war. There is a full list of bunkers here. 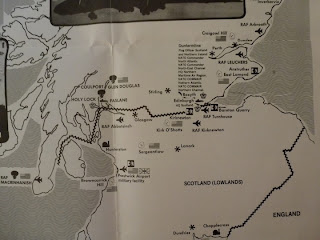 The Cuban missile crisis brought us very close to the Square Leg scenario and several instances when a nuclear war almost started by accident. Despite  attempts to promote fear of terrorism we now live in a far safer world than we have done for fifty years.