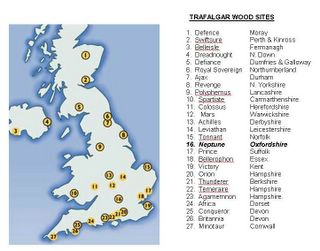 The Trafalgar Woods Project plans to commemorate the bicentenary of the Battle of Trafalgar by planting a total of 250,000 trees in a series of woods across the UK to. There will be a total of 33 woods; each will be given the name of a ship which took part in the battle. So there will be a Defiance Wood near Dumfries, a Revenge Wood near Whitby and a Tonnant Wood in Norfolk. Most of the woods are of about ten or twelve acres with a mixture of trees. The largest will be Victory Wood in Kent with 100,000 trees. There is an interactive map on the website with information on each ship and wood.

In an earlier post I wrote about the Nile Clumps which were planted about 200 years ago to commemorate Nelsons victory at the Battle of the Nile. Each clump represents a ship but instead of being dispersed over the country they are laid out over the South Downs in the same formation that the British and French ships had at a particular point in the battle.