Racial breakdown of US population 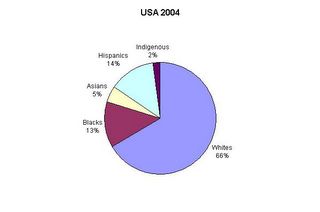 The 2004 chart is based on US Census Bureau statistics. The indigenous category includes native Indians, Alaskans, and native Hawaiians. 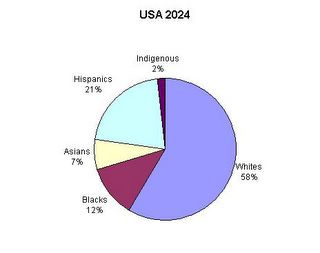 The BBC reported that

"White people of European descent will no longer make up a majority of the US population by the year 2042 - eight years sooner than previous estimates... Non-Hispanic whites, who now make up 66% of the population, will account for 46% by the middle of the century.... Overall, the US population is expected to rise from 305 million people to 439 million by 2050." 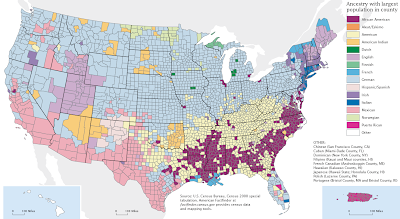 It has been predicted that there will be 129 million Hispanics in the US by 2050, representing 30 per cent of the population."
South Carolina saw the biggest rise in its Hispanic population in the decade to 2010 with an increase of 148 per cent to 236,000 people, closely followed by Alabama with a 145 per cent increase to 186,000 people.
Arkansas, Kentucky, Maryland, Mississippi, North Carolina, South Dakota and Tennessee also saw their Latino populations more than double.
In the Midwest region the number of Hispanics rose 12 times more than the population as a whole, while in the Northeast – around 2,000 miles from the Mexican border – it increased 11 times more than the general population.
At present fewer than half of Hispanics in the US are eligible to vote as so many are either under 18 or are not American citizens."

I live in the big city. I like the pie much better here...