The Killer Whales of Eden 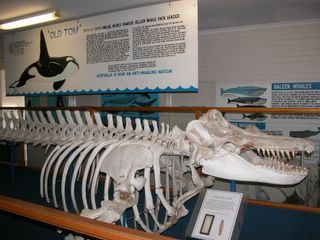 Eden is a small town on Twofold Bay on the south eastern corner of Australia. The killers of Eden were a pod of about 30 killer whales who, between 1830 and 1930, cooperated with the whalers of Twofold Bay in hunting baleen whales migrating along the East coast of Australia.

The story is that the killer whales would herd baleen whales into Twofold Bay and then alert the whalers. They would then work with the whalers to kill the baleens. Their reward was the tongues of the dead whales. The leader of the pod was called Old Tom. To speed up the hunt he would tow the whaler’s boats out to the cornered baleen whales by gripping a bow rope in his mouth. After a whale had been harpooned Old Tom would hang on to the harpoon rope to tire the whale and prevent it escaping. The other whales would dive underneath the harpooned baleen to prevent it diving.

There is a Killer Whale Museum in Eden with Old Tom’s skeleton. If you take a close look at the picture you will be able to see that Old Tom’s teeth are worn down on one side from grasping the bow and harpoon ropes.

This all sounds like an Internet myth but I have been in the museum and seen Old Tom’s skeleton. The museum itself is a substantial operation and has been in existence for over 70 years. There have been a couple of books published about the story. There is also this website. If it is a hoax, it is a remarkable well done one.

The south east corner of Australia is off the regular tourist track. Most of the traffic between Melbourne and Sydney goes along the Hume Highway. If you have the time a trip along the Princess highway will take you past some spectacular coastline, including the excellent Ben Boyd National Park, and some interesting little towns.

No hoax at all. Hear the old people who saw it all with their own eyes at www.killersofeden.com or www.users.bigpond.net.au/killersofeden.
Keep an eye out for the documentary "Killers in Eden"