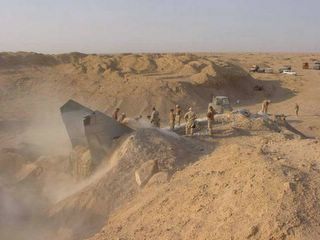 "The al Taqqadum air field west of Baghdad in Iraq, a sandy wasteland surrounded by high dunes off the main Baghdad-to-Jordan highway, was the focus of intense search-and-destroy activity after the U.S.-led invasion of Iraq in March 2003; its vast desert spaces were thought to be a likely location for missile launchers or aircraft from which chemical or biological strikes against U.S. troops might be launched.

What military search teams eventually found at al Taqqadum, in July 2003, were remnants of the Iraqi Air Force as pictured above: a reported 30 to 40 planes, including several MiG-25 and Su-25 ground attack jets, buried more than 10 feet beneath tons of soil and covered with camouflage netting. According to the Pentagon, at least one of the MiG-25s was found because searchers spotted its twin tail fins protruding from the sand. Some of the planes had been wrapped in plastic sheeting to protect their electronics and machinery from the sand (and some had had their wings removed), but others were interred with little or no protection from the sand or the elements. The recovery teams had to use large earth-moving equipment to uncover the aircraft. "

Email ThisBlogThis!Share to TwitterShare to FacebookShare to Pinterest
Labels: strange