My favourite film - The Battle of Algiers 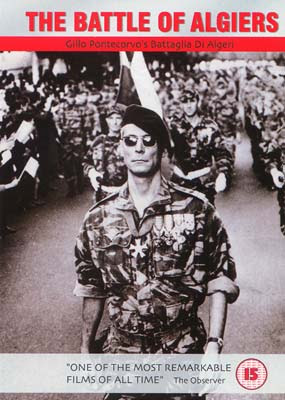 "Gillo Pontecorvo's prizewinner is a masterpiece, a sprawling epic that looks like an authentic documentary, right down to the grainy filmstock and the huge crowds of extras. It is set during the first Algerian attempt to expel the French colonialists. Although obviously partial to the Algerian underdogs, the filmmakers recount a gradual Algerian defeat at the hands of the colonial military. But the Algerians won their independence less than five years later, pulling political victory from a tactical failure. The reaction in France to Algeria's 1962 liberation was for the right-wing OAS to use bombs, bank robberies and assassination to try to bring down De Gaulle's government (as dramatized in the thriller The Day of the Jackal). France lost Algeria because they wanted to hold it as a French enclave where non-Europeans had permanent second-class status. The film shows a prime example of 20th (and 21st) century warfare: a militarily superior force imposing its will in a foreign country that wants its independence.

We're shown the absolute ruthlessness of patriots set on a certain political outcome, where civilized men use torture to get what they want. The film also sets forth the credo of third world defiance that will resort to equal barbarity when no other options are open. Mass murder becomes a political tool to polarize opinion and weaken the resolve of the enemy.

1954: The struggle for independence begins as FLN commanders organize resistance to French rule and impose strict guidelines on the Algerian populace. When escalating 'terrorist' crimes fail to get official attention from Paris, the French police chief of Algiers jump-starts the rebellion by bombing an apartment block in the Casbah. Open warfare commences on the streets and the French finally respond by sending in the paratroopers to clean things up.

In The Battle of Algiers' most famous scene three Algerian women cut their hair and change from strict Islamic costumes into modern European dresses. They carry timed bombs through the roadblocks, enter the European sector of Algiers and calmly plant them in a bar, a disco and a street café. Dozens of civilians are blown to bits in each location.

The Battle of Algiers' convincing recreations are so well choreographed that they look like documentary footage. Cameraman Marcello Gatti keeps things credible with a shrewd use of lenses - everything is staged, but photographed as if it were captured by a very lucky docu cameraman. The entire Algerian capital and its population seem to have turned out for crowd scenes.

Of course, all this produced predictable reactions in 1966. The Black Panthers took it as a 'handbook' film about setting up a resistance organization. To conservatives it was all the work of the devil, more historical lies made up by the same godless Communists responsible for every instance of 'non-compliance' to First-World demands.

Director Gillo Pontecorvo was actually the leader of the anti-Nazi anti-Fascist resistance in Northern Italy in the last year of the war, so he knows more than a little about the reality of fighting as an underdog. Twenty years later, Pontecorvo directed this movie about the Algerian war, starring and produced by one of the FLN's leaders. Proof that The Battle of Algiers isn't propaganda comes when ordinary audiences see it. It's a great thriller with unusual characters and a lot of action presented far more excitingly than in typical war movies."