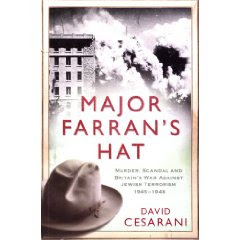 In 1947 Britain was in the unhappy position of holding the Mandate for Palestine and was trying to keep the Jewish and Arab communities apart. The Jews wanted to turn Palestine into the State of Israel and the Arabs wanted to keep their country. A number of Zionist terrorist gangs had been formed and were busy murdering British servicemen and policemen.

A sixteen year old Jewish boy was abducted by a British covert counter-terrorist squad. He was never seen again and it has been claimed that he was tortured and murdered by members of the squad. A hat belonging to the squad's commanding officer, Major Farran, was found at the scene of the kidnapping. Farran  was later  court-martialed for the murder of the boy.

Cesarini has written a well  researched book about the affair. He obviously believes it was an important incident. I am not so sure. Somebody killed a sixteen year old boy and other people in the Palestine administration and UK government behaved dubiously. However, compared to what was to happen in later counter-terrorist operations in Ireland and after 9-11 it was a very minor affair. In Ireland agents of the British government tortured prisoners, operated death squads and planted bombs.  There was certainly nothing approaching the horrors of the British operations against the  Mau Mau in Kenya.

Most people in the Palestine administration and the British Government behaved well and there were no Abu Ghraibs. Farran was acquitted by his court martial [though in rather dodgy circumstances] and went on to have distinguished career in Canada.

What I found most interesting in the book was not the Farran incident but the scale of Zionist terrorism.

I knew about the King David Hotel bombing. What I did not know was -

- The Jewish terrorist gangs killed a lot of British servicemen and policemen in a long series of incidents. Some of the leaders of these gangs are now commemorated in Israel and two went on to become Prime Ministers of Israel.  This is something to remember when the Israeli government prates about Palestinian terrorists.

-It was no surprise to learn that there was a great deal of hysterical and inaccurate reporting by the Daily Mail and other British newspapers.

The British government behaved well during the Jewish terrorist gangs bombing campaign in Britain. Unlike the Blair government they didn't over react and introduce unnecessary and repressive legislation. The police and intelligence agencies were effective with the powers they already had and easily dealt with the terrorists.

The problem of Jewish terrorism went away when Britain pulled out of Palestine. Perhaps the lesson of that is that the problem of Moslem terrorism may well go way when we are no longer in Iraq and Afghanistan.

I thought that Professor Cesarani was rather too indignant about the actvities of Major Farron and some of the other British players in this drama. Despite that the book is well worth reading.