The Jacquard loom was invented by Joseph Marie Jacquard in Lyon in 1801 to weave textiles, mainly silk.

It stored  weaving programmes in a series of punched cards. Usually, about 4,000 cards were used for each design, though a portrait of  Jacquard [see below] needed 24,000 cards.   I have seen one of these portraits [in the Cité des Sciences et de l'Industrie, Paris] and the quality is remarkable. 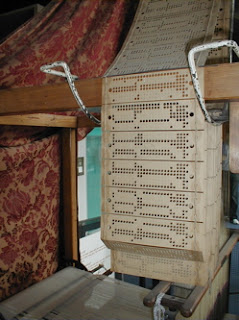 Automatic  looms were already in use but could only produce simple designs. Complex patterns had to be produced by hand weavers. The Jacquard loom allowed  complex designs to be machine produced.

In a process that was very reminiscent of that once used to create computer programs a design would be drawn on paper and a punch card machine  would be used to create a set of cards. These were then stitched together.

Once a set had been tested it could easily be duplicated on another specialised machine. Sets of cards could then be sold  to other weavers or used on several machines simultaneously.

Essinger claims that the Jacquard loom  increased the productivity of weavers  about 24 fold and transformed the Lyon silk weaving industry.

Jacquard's invention was not completely original. It built on earlier work by three other inventors.

Basile Bouchon invented a way to control a loom [see below] with a perforated paper tape in 1725. A year later his co-worker Jean-Baptiste Falcon improved the design by using perforated paper cards instead of a tape. This made it easier to quickly change programs. However, the Bouchon-Falcon loom was only  semi-automatic.

In 1745 Jacques de Vaucanson built on the work of Bouchon and  Falcon and created the world's first completely automated loom.  His invention attracted the hostility of hand weavers and was largely ignored.


The Jacquard loom separated a loom from the instructions used to operate it. This stored program concept can be directly traced to the architecture of modern computers.

Jacquard did not invent the idea of separating a machine and the instructions to operate the machine [stored program concept]. That was done by Bouchon.  Nor did he invent the idea of storing instructions on punched cards. That was done by Falcon.  Jacquards contribution was to use the ideas of Bouchon and Falcon and produce an efficient and practical card controlled loom.

Jacquard machines were soon employed in other industries. 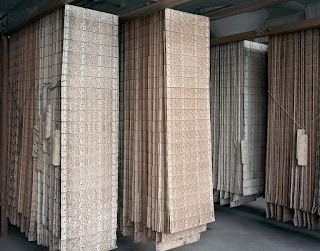 These cards were employed in Nottingham's [UK] lace industry.


Jacquard is important in the history of computing because his loom influenced Charles Babbage who had the idea of using punched cards to control his Analytical Engine. Babbage certainly knew of Jacquard's device. He owned a copy of the machine woven portrait of Jacquard.

Punched cards were also used by Herman Hollerith to input US Census data to his tabulating machines. Hollerith's contribution was to use punched cards to store data as well as programs. This was another important milestone in the development of modern computers.

In 1945 John von Neumann developed the von Neumann architecture for computers. This separated  data from the programme used to process the data, and both from the computing device. Just as Jacquard separated silk, punched cards and loom.

Essinger, J., 2007. Jacquard's Web: How a Hand-loom Led to the Birth of the Information Age New Ed., Oxford University Press.


More Industrial Revelations [DVD] 2010 has an excellent episode [Cutting it Fine] on Jacquards Loom covering the inventions that preceded and followed Jacquards Loom.  It also shows how the cards were produced.

Paradise Mill is part of the Silk Museum in in Macclesfield. This mill was Macclesfield's last working Jacquard silk-weaving mill until its closure in 1981. Cheaper imported silks and high quality new synthetic materials made the production of silk in England an uneconomic prospect. It is a large mill and still houses over 20 original fully working Jacquard looms - each still capable of producing the kind of intricate and delicate woven patternwork that made  Macclesfield famous throughout Britain for the production of fine silks These looms have been lovingly restored to their original working condition, and can be seen in operation during the guided tours organised by the Silk Museum. 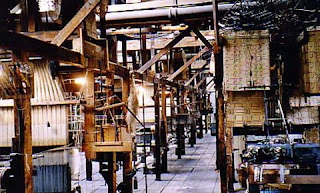