In 1916 over 250,000 French and German soldiers were killed in the Battle of Verdun. A further half a million were wounded. In term of casualties it was one of the worse battles in human history. Some of the worse fighting was around the French fort at Douamont.

Fort Douaumont was one of a number of forts built [according to the Sere de Riveres system] near the small town of Verdun. The French had decided to abandon these forts because they believed they were too vulnerable to artillery. However, when the Germans easily captured Douaumont the French were seized by an overwhelming desire to get it back. Over 100,000 men were killed or wounded before the fort was recaptured.

I visited Fort Douaumont about 8-10 years ago, and revisited this year during a trip across Northern France. Visitors can stroll on top of the fort [which is heavily pockmarked from artillery fire], and tour the internal galleries. More galleries have been opened since I first visited and one of the gun turrets can now be visited. 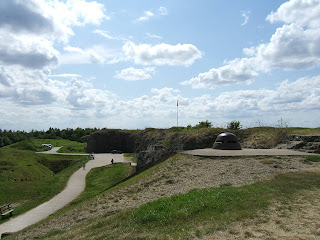 The entrance to the fort. 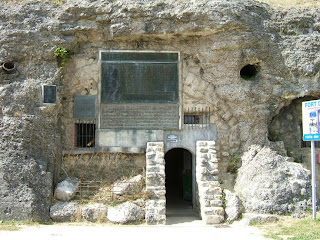 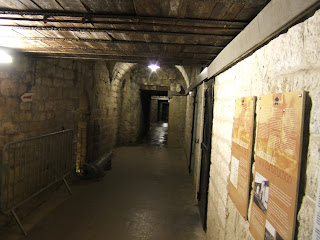 Whilst the Germans were occupying the fort a cooking fire ignited grenades and flame-thrower fuel and 600-1000 soldiers died [different websites give different casualties numbers. I think a sign at the memorial below gives a figure of 975]. The bodies could not be taken outside the fort because of French shelling so they were walled up in a tunnel. The site is now an official German war grave. 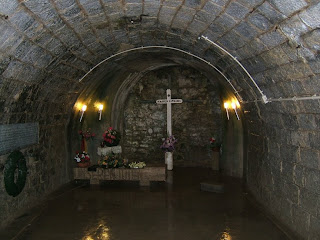 The toilets below were not installed until after the battle. One can only wonder what conditions were like inside the fort when there were over a thousand men inside and no sanitary facilities. 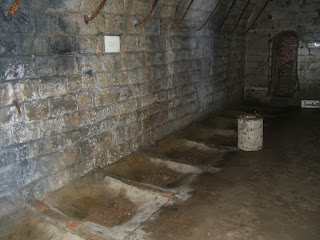 Fort Douaumont is one of the most important WW1 sites but it is deteriorating and the French government needs to spend some money on restoration and preservation.

Other WW1 sites nearby

Fort Douaumont is shown to the top right in the aerial photograph below. The large site is the Ossuary and is the subject of a separate post.

The site at Fleury devant Douaumont is a large memorial and museum [with a good library and shop]. All three are worth visiting. By following our GPS we managed to repeatedly get lost, though as can be seen from the aerial shot the three sites are close together.


There are many other relics of the war in the area. 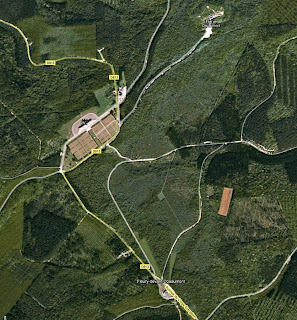 
When I first visited Fort Douaumont they had a number of sterioscopic photographs on display. These were amazingly vivid, one in particular. It showed a French artillery crew resting by their gun. Though the photograph was only black and white the 3-D effect and sharp image made the Frenchmen look very alive. They looked like people you can see any day in the streets, but better looking and more sophisticated.  Probably most of them were later consumed by the 'mincing machine'.

The stereoscopic photographs had gone from Fort Douaumont when I visited recently but there were a large number on display at the Ossuary.