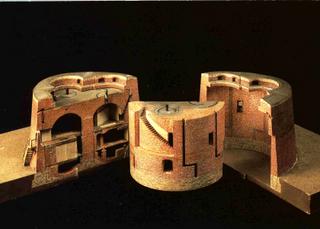 Beginning in the 17th century the French began constructing detailed models of their major fortifications and those of possible enemies. Some of these models are now on display in the Le Musée des Plans-Reliefs in Paris. Others are in a museum in Lille, and some were lost in the Second World War.

The model shown in the illustration is of a Martello Tower. The British were impressed with the design after one on Corsica held off two British warships and was only captured after an assault by Royal Marines. The British built them all around the UK and across the Empire; including one in Sydney.

It is a few years since I visited the Musée des Plans-Reliefs but I remember it as being an interesting half day excursion.