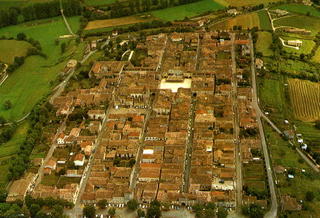 Bastides are small fortified towns which were built in France from the 13th century. Many survive to this day, particularly in Lot and the Dordogne. I have visited several, but I did not understand their significance until I read this Wikipedia article.

I found all this interesting for two reasons. The first is that what had been pleasant places to visit whilst on holiday were the products of medieval entrepreneurship and town planning. The bastides were also major social innovations and part of the decline of feudalism. 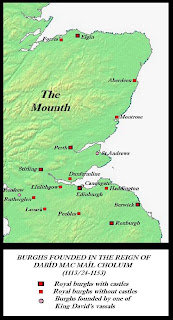 The second reason that I was interested in bastides is that that there is something very similar in Scotland. When David I became King of Scotland in 1124 he thought his country was backward, and he started construction of a number of burghs, or trading towns. Forres, Elgin, Crail, Berwick and Lanark are all burghs. The burghs were built for the same reasons as the bastides; to encourage trade and generate tax revenue. Merchants who moved into a burgh were given a feu. These were plots of land of about 25 feet by 430 feet which butted onto the marketplace. In many burghs the older part of the town still follows the original plan and the feus can be clearly seen. Burghs would also have a castle and a tollbooth. The latter was for the purposes of tax collection.

The January 1995 edition of the Scots Magazine has a good article on the Scottish Royal Burghs. There is also this Wikipedia article.

Both the French and the English built bastides in France. The one in the illustration is an English bastide called Monpazier. It was built in the Dordogne in 1284 by Edward I of England.