Andros is the largest island in the Bahamas. It is flat and largely empty, with a population of only 6000. Some people go there to fish. Others visit to dive the barrier reef, though I would not recommend doing that. The Caribbean is cut off from other tropical waters by the cold Atlantic and has a very poor range of corals and fish.

However, it does offer some exciting diving of a different kind, and that was why I went there. The island sits on the edge of the steep oceanic trench called the Tongue of the Ocean. This means that when you dive off one side of the island you don't see a long low reef, but an underwater wall which goes down and down to 6000 feet. If you've seen the film The Abyss you have an idea of what the conditions are like. Some parts of that were filmed off Andros. 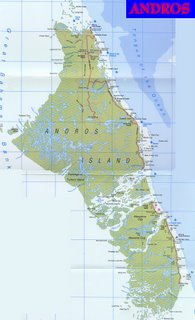 I did some wall diving whilst I was there, and have written about that in a previous posting. See the Over the Wall to 185' post.

The main attraction of Andros is its blue holes. These are underwater cave systems. Some are inland; others are entered from the ocean. Rob Palmer wrote about the blue holes of Andros in his book Deep into Blue Holes which was published by Unwin Hyman Limited in 1989. ISBN 0-04-440380-1. It's a very good read if you can manage to get a copy.

I dived several of the blue holes. The best of these was the Guardian Blue Hole. The guardian of the blue hole was a barracuda, a half blind brown barracuda. The Guardian is an inland blue hole so it was strange that it should have a barracuda in it. Some people think the presence of the barracuda indicated that the Guardian Blue Hole had a link to the sea. Others thought that somebody had introduced the barracuda, or that it had been swept in by a tropical storm while still very small.

Life in the blue hole had not suited the barracuda. Rotting vegetation had put a lot of tannin in the water and this had colored the barracuda brown and damaged its eyesight. Perhaps it had also made it a bit testy.

My partner for the dive had been to the blue hole a lot of times before. He told me that he had been feeding the barracuda, and that he had trained it to eat sausages from his hand. He said it had bitten hime three times and would have to wear thick gloves in case it snapped at our hands. This was not good news for another reason. My partner was in a thick protective wetsuit, but I was wearing a thin and very tight Lycra suit. So thin and tight that some anatomical features were prominent. The idea of a half blind sausage eating barracuda rather alarmed me. I wondered how easy it would be to fin in a crouching position. 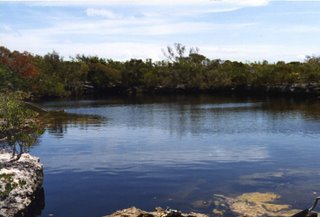 We were diving with double tanks, in fact double everything, to provide redundancy in case of an equipment failure. Once we had donned all the kit and jumped into the water it was only a few tense minutes before we were at ten meters, through the tannin layer and below the realm of the barracuda. That was a relief. The next part of the dive involved following a fixed line to a large cavern at about 40 m and then ascending to a point where there's a constriction in the tunnel. To progress beyond this point you need to remove your tank and push it ahead of you through a very tight hole. The rest of the cave layout is shown in the map below. These caves were once above water, and you can see the stalactites that formed then.

The Guardian Blue Hole was a very good dive. In fact, all the wall and blue hole dives that I did on Andros were outstanding. The best place to stay on the island is at Small Hope Bay lodge. They have a menu of specialist dives, and can provide equipment and transport. This is the only place in the world that I know of where you can do really deep wall dives [180-190 feet], plus a range of cave and cavern dives.

Todd HellsKitchen said...
This comment has been removed by a blog administrator.
2:30 am

Anonymous said...
This comment has been removed by a blog administrator.
7:30 pm

WO said...
This comment has been removed by a blog administrator.
7:52 pm

Anonymous said...
This comment has been removed by a blog administrator.
11:43 pm

Anonymous said...
This comment has been removed by a blog administrator.
12:31 pm