The research arm of the Swiss bank Credit Suisse publishes an annual Global Wealth Report. You can download copies of the report from here.

"Net worth, or "wealth," is defined as the value of financial assets plus real assets (principally housing) owned by households, minus their debts. This corresponds to the balance sheet that a household might draw up, listing the items which are owned, and their net value if sold. Private pension fund assets are included, but not entitlements to state pensions. Human capital is excluded altogether, along with assets and debts owned by the state (which cannot easily be assigned to individuals).

All the values are in US dollars


These are the mean and median wealth values for eleven countries. 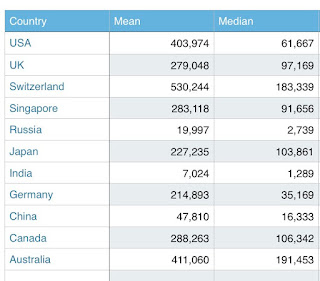 Note the big differences between the mean and median values.

The mean [aka arithmetic mean or average] values are calculated by adding the wealth of all the households in a country and then dividing by the number of households.

An Example of Mean v Median

The mean value of 31 in table 2 has been calculated by adding the five values together and dividing by 5.

The median value of 19 in table  has been calculated by ranking incomes from highest to lowest and then taking the value that is in the middle of the list. 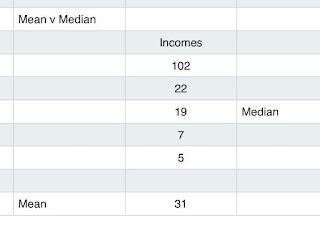 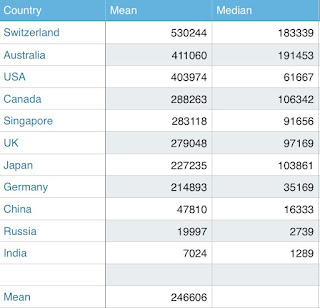 Canada has a lower mean than the USA but has a much higher median of 106,342 [not so many billionaires]. 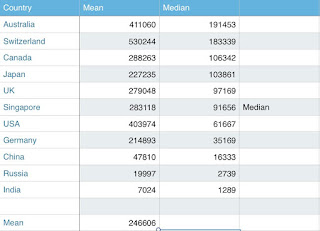 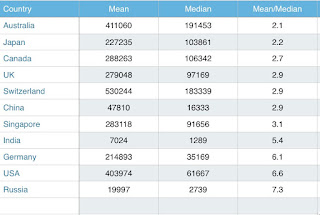 The BBC website has an article about the wealth of the 1% in different countries. It has the following two charts. 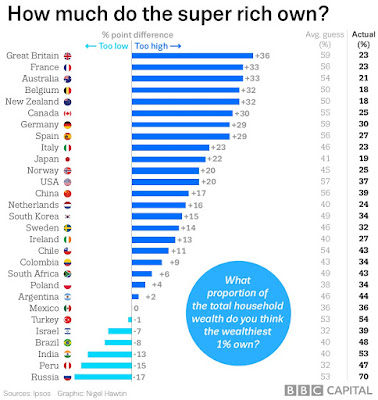 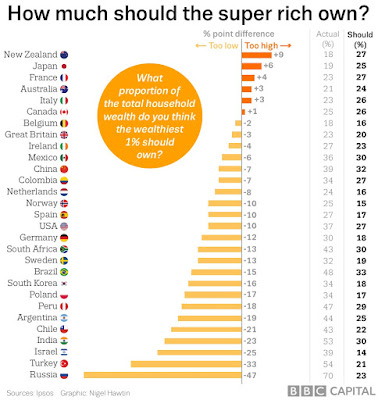 The article provides an interpretation of the values in the charts. For example, the first chart shows that the French think that the 1% own 56% of the national wealth when they actually own 23%.

The second chart appears to show that the French think that their 1% should own no more than 27%. Does that mean that they think that the 1% should be increasing their  share of national wealth?

The article suggests that "that’s the completely wrong interpretation. ....what they’re really saying is that the very wealthy should have about half what they currently have." That would be about 12% of French national wealth.