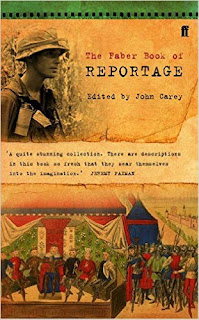 John Carey  is a British literary critic, and former Merton Professor of English Literature at the University of Oxford. He is the editor  of the Faber Book of Reportage (1987). This was published in America as Eyewitness to History, Harvard University Press, (1987).

The book [700 pages in paperback] is a collection of over 250 reports, starting with a report of the plague in Athens in 430 BC and ending with a report of the fall of President Marcos in 1986.  In between there are reports of a dinner with Attila the Hun, the torture of a Jesuit in the Tower of London, the Confederate bombardment at Gettysburg, the execution of Nazi war criminals and the My Lai massacre.

Some of the reports are several pages long. Others are only about a single page or even half a page.

The book is still in print. It is a superb read and I recommend it to you.

I found the book after reading Carey's autobiography, The Unexpected Professor: An Oxford Life (2014).

Carey is also the editor of  The Faber Book of Science (1995). That was published in America as Eyewitness to Science: Scientists and Writers Illuminate Natural Phenomena from Fossils to Fractals, Harvard University Press, (1997).