The West Loch Lomond Cycle Path runs from Tarbet near the top end of Loch Lomond to Balloch at the bottom of the loch. The path is about 28 kilometers long, and runs along the west bank of Loch Lomond, between the loch banks and the busy A82 road. It is best ridden from north to south, unless you prefer doing more cycling uphill than downhill.

If you would like to do the ride you can start by taking the Oban/Mallaig train to Arrochar & Tarbet Station from Glasgow's Queen Street Station. The train takes about 80 minutes, and goes up the shores of Gare Loch; passing the submarine base and the nuclear weapons store dug into the hillside. After you leave Tarbet Station you should turn left and ride down the hill to the tourist information office by the loch. The path starts a few yards away on the A82. The first few miles of the ride are on the pavement of the A82. For the remainder of the ride the path runs either alongside the road, or between the road and the loch. The path is poorly signposted. It has signs where they are not needed, and none where they are. 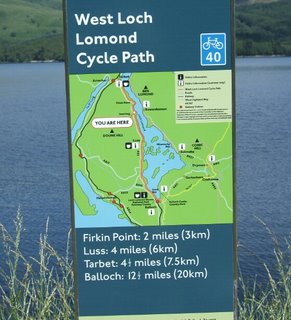 It is a pleasant enough ride, but is dominated by the noisy traffic on the A82. Too much of the path runs directly alongside the A82, and the rest is not very far away. The golf courses and commercial developments along the side of the loch [how did they happen in a national park] further push the path away from the water. 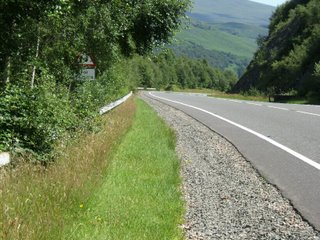 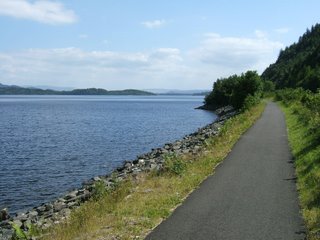