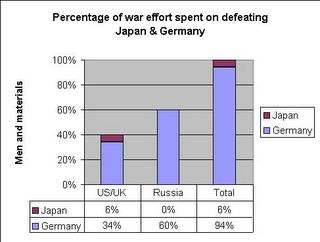 I have just been re-reading Richard Overy’s highly regarded book on the Second World War, ‘How the Allies Won’. The Sunday Times described the book as “a masterpiece of analytical history”.

I had always assumed that Japan and Germany had been about equally difficult to defeat, and had required about the same commitment of men and materials. Apparently this was not so. Very early in the war the USA and UK agreed a 'Germany First' policy. Despite it having been Japan's attack on Pearl Harbour which brough the USA into the war they agreed that the priority should be to defeat Germany

Overy makes the remarkable statement that “the United States devoted only about 15 percent of its war effort to the war with Japan. The other 85 per cent was expended in the defeat of Germany.” Britain and its empire probably split its effort, more or less, on the same lines as the Americans. Russia contributed almost nothing to the defeat of Japan, devoting all its resources to crushing Germany.

The US and UK were largely responsible for deafeating the German navy and air force, but Germany's superb army of 200+ divisions was almost entirely destroyed by the Russians. Only 30 German divisions, and generally not the best ones, were deployed in the West. All the others were on the Eastern front. Russians military deaths have been estimated at 10 million,  compared to the 416,000 American and  383,000 British soldiers, sailors and airmen killed on both fronts.

If we assume, and this is my assumption, not Overy's, that Russia provided 60 per cent [mainly people] of the Allied resources in WW2 and the US/UK the other 40 per cent [mainly materials], we get the calculation

that only 6 per cent of the total Allied resources were devoted to the defeat of Japan. This would make the war in the Pacific a sideshow.

You can see why this might be so. Japan started the war with many short term advantages. It had an experienced army and navy and some good weapons, such as the Zero fighter and the Long Lance torpedo, but its lack of oil and geographical disadvantages meant that its position was hopeless right from the start. It could be defeated by sea [mainly by mining of harbours {Operation Starvation} and submarine warfare] and air power.   As, of course, some Japanese realised before the war. The attack on Pearl Harbour was, in reality, a very loud suicide note.

Germany was damaged by naval blockades and bombing but could have survived both. They had to be defeated the hard way.