Dover has always been Britain's main entry port and has been heavily fortified against invaders. Dover Castle dominates the town and gets about 300,000 visitors each year. I visited it recently. It is a large site with a range of things to see from a Roman lighthouse and a Saxon church to World War II tunnels.

It is interesting enough but rather overpriced and some of the exhibits are not very well done. There are a number of tunnel systems underneath the castle. One was built during the Napoleonic period, another during WW2 and a third in preparation for WW3. The first two are open to the public but there are usually long queues and too much Health and Safety hassle.

Dover has another set of fortifications; much larger than Dover Castle. Most visitors do not know they exist and they are free to visit. They are the Western heights forts. As the sign below says they were started in the 1770s and some parts are still in use. 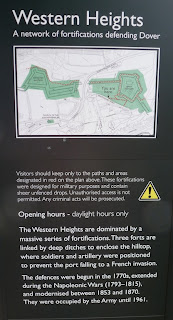 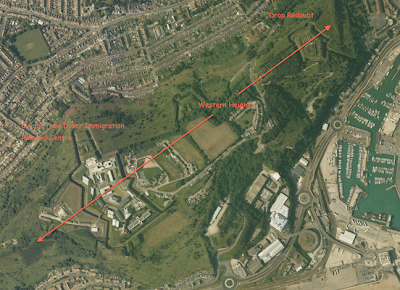 There are three linked fortifications.  At one end there is a star fort called the Drop Redoubt. You can walk around the fort's ditch and occasionally the fort is opened to the public by the Western Heights Preservation Society. It was not open on the day I visited. At the other end is a larger start fort. This is closed to the public because it is in use as a government immigration removal centre.
In between the two forts is a series of dry moats called The Lines. You can visit these but they are heavily overgrown.

The Grand Shaft is nearby.  It is usually closed but there are open days. It would be worth arranging your visit for when the Drop Redoubt and the Grand Shaft are open.
I have some other posts about star forts. Click on the starfort label to see them.
Britain built several  star forts and other fortifications to keep out Napoleon.  Link
There is a 1861  Palmerston Fort called  Fort Burgoyne just behind Dover Castle.  Photos.