In search of a decent cup of coffee 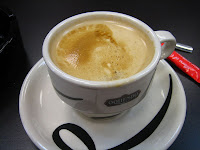 It has been a long road, but I think I am reaching its end

The British have no taste for quality beverages. For example, we drink a lot of tea, but it is poor quality tea.  We add milk and sugar to disguise the quality of the tea leaf.

For a long time the British  only drank instant coffee [and a lot of people still do; judging by the supermarket shelves].

Then Starbucks and its clones arrived and popularised the espresso. An espresso is so much better than an instant coffee that we thought these chains were serving good coffee.

Slowly we are realising that they aren't. We are realising that these chains are not serving coffee but coffee flavoured milk.  They are serving big drinks where the ratio of milk to coffee can be as much as 11:1. To add insult to injury they are serving their coffee flavoured milk in paper cups and at high prices. Customers have started to complain and the chains are experimenting with coffees that have better espresso to milk ratios. One of their experiments is the flat white.

The flat white originated in Australia and New Zealand. It is prepared by pouring microfoam (steamed milk from the bottom of a pitcher) over a single (1 fluid oz) or double shot (2 fluid oz) of espresso. It is usually served in a 6 oz ceramic cup [a milk to coffee ratio of 4:1 or 2:1].

In my opinion, Spain is the European country that serves the best coffee in the form of the cafe con leche (coffee with milk). You might expect that Italy would serve the best coffee but its not so.  I have often been disappointed with the coffees I have had in Italy. The one exception was the coffee I was served in a  restaurant in a small hilltop village outside Sienna. It was not a posh restaurant. The local plumber and his apprentice were having their evening meal at the next table, but by some magical combination of circumstances [probably including a freshly cleaned machine and good beans]  it served the best coffee I have ever tasted.

Café con leche is a coffee beverage consisting of  scalded milk mixed with a shot of espresso in a 1:1 or 2:1 ratio. The big difference between the flat white and the cafe con leche is the espresso/milk ratio and the use of scalded rather than steamed milk. Steamed milk is heated to a lower temperature and is sweeter than scalded milk. Both use full fat milk.

If you order a cafe con leche in Spain you will notice four differences compared to a Starbucks coffee flavoured drink.
The cafe con leche is the drink of Spain, Portugal [I have had excellent coffees on the Portuguese island of Madeira] and amongst the Cuban expatriates in Florida. 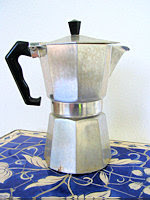 I have tried producing cafe con leches using a stovetop espresso pot. The best ones are from Italy. I have a three cup model from Bialetti [three cup is misleading - it produces one cafe con leche]. The method is described here.

It produces better coffee than filter coffee machines or cafetieres, but not a proper Spanish cafe con leche. The crema produced by a good espresso machine is missing [though Bialetti claim they have a model which does produce a crema]. The stovetop machines do not produce a pressure above two bar. A pressure of over nine bar is needed for an espresso.

Now I am producing my espressos using a Nespresso machine. I just insert an aluminium capsule containing coffee [there are 16 different coffees available from the Nespresso website] and press a button. The capsules are about 35p each [Nespresso coffee is very expensive per pound] but the machine can generate up to 19 bar pressure and produces a good espresso with an excellent crema. The machines are very easy to use and clean. The British 'Which' consumer magazine rightly gives them a high rating. The machines produce coffee which is better than that produced by drip filters, stovetop espresso pots and cafetieres.

This NYT article has a lot of useful information on Nespresso and other single serve coffee makers.

The basic component of all good coffee is a shot of espresso.  Then we can choose whether we add water or milk, and in what proportions. Do we want steamed, scalded or warmed milk. Do we want foam or not.

Even the espresso is subject to variations. A ristretto is a short espresso. It is produced using about about three quarters of the water  of a standard espresso. A lungo is a long espresso and is produced using about two or three times the water of a standard espresso.  My Nespresso machine has buttons for selecting either an espresso or a lungo. The differences are more than a matter of volume. A ristretto is not just a strong espresso and a lungo is not just a weak espresso. Not all the elements of coffee dissolve at the same rate. An espresso has some elements that are not in a ristretto. Using more water to produce a lungo can produce a bitter shot if a suitable bean is not used.

It also matters when you add water. Adding it after brewing [as in an Americano] produces a different taste to adding it during brewing, hence the ristretto and lungo variations on the standard espresso.

I have a love hate relationship with coffee... I really think tea is better for one's health... Yet, I can't seem to kick the coffee habit...