The UK does not have many trees. At least, not as many as our European neighbours. A third of France is woodland. Finland has 72% tree cover. The European average is 44%.  The UK has just achieved a level of 11.8%. That brings us back to a level we last achieved in 1750, before forests were chopped down to build the ships to fight Napoleon.
Six thousand years ago 75% of Britain was covered in trees. By the early Iron Age [2500BP]  woodland cover had been reduced to about 50%. Nine hundred years ago, at the time of the Domesday Book cover was down to about 15%.  By the time of William the Conqueror most of our trees had been chopped down.
Recent changes to tax allowances have made tree planting attractive and there is now some hope that tree cover might get back to Domesday Book levels.
That is still a very low level by European standards and many of the new woods are small and isolated. From a biodiversity point of view one 100 hectare wood is better than ten 10 hectare woods. We need to encourage more woods, bigger woods and connected woods. 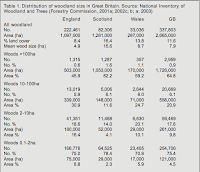 We also need to plant more trees so that we don't seem such hypocrites when we criticise countries in South America and Asia for cutting down their forests.
There is plenty of land available.  In Scotland's central belt, the most densely part of the country, there are many square miles of land that was once forested. The trees were cut down to create sheep runs. Now the return from sheep is so poor that the land is unused. A great national forest could be created in central Scotland.  That would be a great recreational asset, as well as capturing carbon.
In the north of Scotland the big sporting estates make their money from deer stalking, and nothing keeps an area clear of trees better than deer.
The picturesque Highlands landscape that tourists love is, in fact, a devastated industrial landscape, the industries being shooting and sheep.
I had hoped the SNP government might act re- afforestation but they have kept their thumb up their bum on tree planting. Maybe because the need the support of the Scottish Conservative Party to pass their legislation. The Conservatives are great friends of the big landowners.

I wish NYC would plant more... The mayor talks about it, but I just don't see it happening...