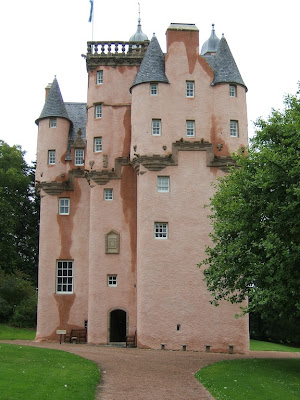 Craigievar Castle is not a castle but a tower house built in the Scottish Baronial style.  Its walls are thick, its windows high off the ground and it has a yett to protect its door; but it was designed to keep criminals out, not armies.

Tower houses are found elsewhere in Scotland, and in other countries.  Spain has them. The ones in San Gimignano in Italy are well known. Pavia has some nice ones. There are two right in the centre of Bologna. There is a small one a few miles from my house.

Craigievar is located west of Aberdeen in Scotland, close to the  tower houses of Crathes Castle and Castle Fraser.

I have already posted on Crathes and will post on Castle Fraser. The houses are very similar, partly because they were all worked on by the same family of masons.  Also, no doubt their owners swapped ideas.

Many consider Craigievar the most romantic of the Scottish tower houses. It is certainly the most striking. Especially since it is now pretty in pink.


The castle belongs to the National Trust for Scotland. In the 1970s the castle was covered with a cement harl. That turned out to be a bad idea because cement traps water between the harl and the building, leading to structural and internal damage.

In 2009 the the castle was closed while the cement harl was stripped off and replaced with a lime harl which allows the building to breath. The cement harl had been off white but pigment was added to the lime harl to restore the pink appearance that Craigievar had had in the early 19th century.  The castle now looks fabulous.

It costs £11 to join a guided tour of the castle. The only way to move from floor to floor is by a narrow stone staircase.  Tower houses are not comfortable places. The castle does not have electric lighting in most of its rooms and the only heating is from open fires. Baths were a late addition. They are not for the old or young because steep stone stairs connect the many floors. 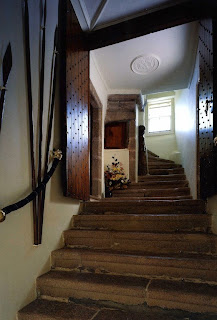 Rather annoyingly, the National Trust does not allow photography within the building.