A visit to Crespi d'Adda 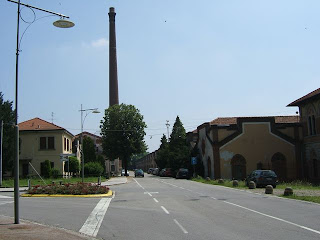 Crespi d'Adda is a industrial heritage site a few miles east of Milan, Italy. Like Saltaire in England and New Lanark in Scotland it consists of a cotton mill and workers housing. It was built in 1875 by Cristoforo Benigno Crespi on the banks of the Adda. Like New Lanark [1786] it used hydroelectric power to run the mill machinery. Saltaire [1853] was powered by coal. All three are examples of 'model villages', where a benevolent employer not only provided employment, but good quality housing and other social amenities. All three villages are now designated by UNESCO as World Heritage sites.

All the mills are closed [Crespi in 2004, New Lanark in 1968 and Salt's Mill in 1986] but their housing is still occupied. I have visited New Lanark and Saltaire and had hoped to tour the Crespi d'Adda mills. When we arrived we found that it is possible to wonder around the village, but the factory is only open to pre-arranged tour groups. There is a Visitors Centre but when we visited it was only open in the mornings.  That was a pity because it appeared to have quite a bit of information on the mills and village. 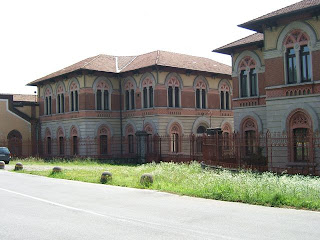 The mill buildings are very ornate and appeared to be in good condition. 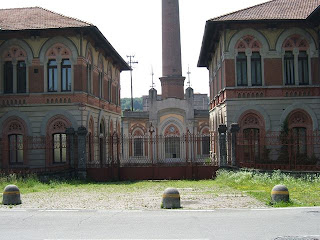 New Lanark provided tenement block accommodation fro its workers and Saltaire has rows of terraced houses. Crespi d'Adda had a policy of providing high quality individual houses for its workers. The owners believed it reduced the potential for industrial unrest. You can see the quality of the housing from the photograph below. 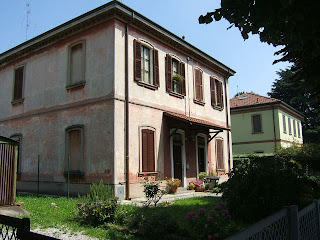