Listed below are five places to visit during a trip to London. All are off the usual tourist track. All are free. All will take you away from the London traffic and the packed pavements.

Hunterian Museum – this museum is in the Royal College of Surgeons of England building in Lincoln’s Inn Fields. The subject of the museum is anatomy and surgery, from the earliest times to the present day. There is a magnificent collection of specimens, models and surgical tools. One thing that caught my eye was a number of drawers, each containing all the surgical instruments needed for a particular type of operation. The museum is open to everyone and entry is free. It is a fascinating place, though there were only two other visitors whilst I was there.

[btw - There is another Hunterian Museum in Glasgow. This one is on the campus of the University of Glasgow and also has a medical theme. It is smaller than the London museum.] 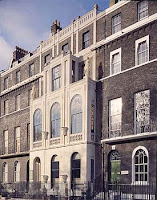 Sir John Soane’s Museum – this is also in Lincoln’s Inn Fields, on the opposite side of the square from the Hunterian Museum. The museum is in the former house of the architect Sir John Soane and contains his collection of models, prints and antiquities. The house can only accommodate fifty visitors at a time. When I visited I had to wait outside for a few minutes until somebody left and I could enter. The collections are interesting, and so is the house itself. The internal decoration is rather strange. I felt it was as if the house had been the HQ of some strange cult and each decorative feature had some symbolism known only to the initiates. The museum is open to everyone and entry is free.

Lincoln's Inn is one of four Inns of Court in London to which barristers of England and Wales belong and where they are called to the Bar. It lies just to the side of Lincoln’s Inn Fields. It has two fine squares and many fine buildings. You can just wander around the court and admire the buildings and watch the barristers scurrying about. There are three other Inns of Court. Gray’s Inn is nearby and Middle Temple and Inner Temple are just to the south. These Inns are fascinating places. You just walk down a quiet alley or through a passageway and you are in a different world. The Inns are often used for filming because they have an atmosphere and appearance quite different from the rest of modern London.

Holborn underground station is only a short walk away from Lincoln’s Inn Fields.

Regents Canal runs from Limehouse Basin [Limehouse Station on the Docklands Light Railway] on the Thames to Paddington Basin [Edgeware Road underground station]. It’s a delightful afternoon’s walk across London away from all the noise and traffic. See pink line on map for the route.

The Museum in Docklands is in a former sugar warehouse on the side of West India Docks. It tells the story of London’s Docklands and is one of the most interesting museums I have ever visited. You will need to allow several hours to see everything. It is well laid out and very comprehensive. When I was there they were just finishing a new £1 million gallery about the involvement of the docks in the slave trade. After you have been in the museum you can walk a short distance to the financial centre of Canary Wharf [Docklands Light railway and Jubilee underground line]. The place looks so different from the rest of London that it could have been built by aliens [rich aliens that is].