Scapa Flow is a sheltered anchorage in the Orkneys, to the north of the Scottish mainland. During the First World War it was the main anchorage for Britain's Grand Fleet.

After the end of the First World War 78 ships of the German High Seas fleet were interned in Scapa, with some of the original crews aboard each ship. On the 21st June 1919 the German sailors began scuttling the ships and 51 battleships and other vessels went to the bottom of the Flow. The British succeeded in beaching a few ships before they sank.

Between the First and Second World Wars many of the ships were raised in an extraordinary salvage effort. 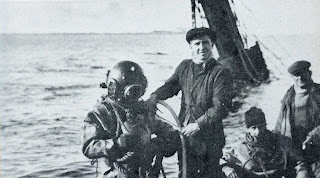 The potential rewards to the salvors were great. When the battleship Freiedrich der Gross was raised and broken up she yielded 18,943 tons of ferrous metal and 774 tons of lead, brass. gunmetal, copper and other non-ferrous metals. These metals were worth a total of £134,886.

The problem was, how to raise almost 20,000 tons of ship from the seabed.

The solution was ingenious and dangerous.

Long steel tubes containing airlocks were lowered down and welded to the ships hulls by divers. Some of these tubes were over 30m long. Air was then pumped into the hulls to begin forcing out the water. Workers would row up to a tube, climb down the inside, through the airlocks and work inside the ships whilst they lay on the seabed. 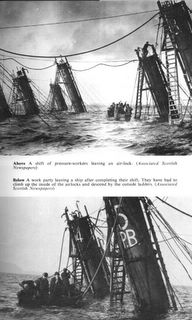 Being inside one of these huge ships whilst it was still on the seabed must have been an incredible experience. 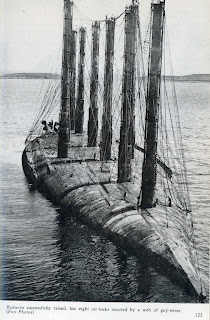 When the ships had been made completely airtight more air was pumped in and the ships raised and towed away to be salvaged. The photograph below shows the battleship Von der Tann passing under the Forth Bridge to be broken up at Rosyth. The Von der Tann fought in the Battle of Jutland. She put two salvos of 280mm shells in the British battlecruiser Indefatigable, causing a magazine explosion and the loss of the ship and all but two of her 1,017 crew. 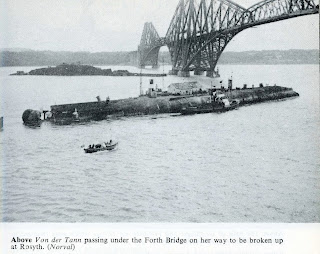 The salvage operation was an arduous and risky business, and there were several fatalities. The full story is told in S C George’s excellent 1973 book 'Jutland to Junkyard'. A total of 26 destroyers, five battle cruisers, seven battleships and a cruiser were raised in the heroic salvage effort. 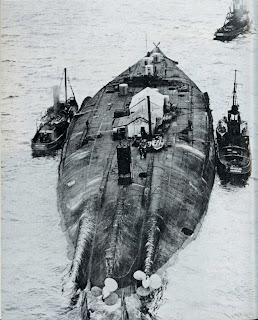 Not all the German ships could be raised and there are still ten wrecks remaining, including three battleships and four cruisers. I once spend a week diving some of these.

These wrecks, in addition to six other German wrecks, 28 British wrecks, 33 blockships and the massive wrecks of the British battleships HMS Vanguard and HMS Royal Oak, make Scapa Flow a wreck divers heaven. The only remotely comparable site is Truk Lagoon, but it does not have the big ships. Many of the turrets of the German battleships fell out when the ships rolled over as they sank. Some of these turrets weighed over 10,000 tons; heavier than most of the ships sunk at Truk.

The German battleships are so large that it takes several dives to adequately cover each wreck. Often it is hard to tell where you are on a wreck. All three of the battleships are below 130 feet and at the limit for compressed air diving. The development of mixed gas diving has made the wrecks more accessible. 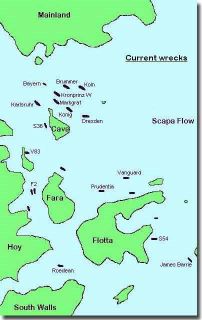 Since the first atomic tests in the 1940s all new steel is contaminated by the radioactivity that is present in the air and is drawn into the furnaces during production. When uncontaminated steel is needed for medical and scientific instruments it can only be obtained from metal produced before the first atomic test. So it is that small amounts of steel are occasionally salvaged from the Koenig to make instruments. Some of these instruments are used in the space program and part of a WWI German battleship has been to the moon.

More images after the break 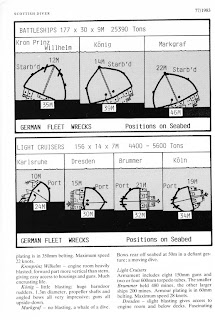 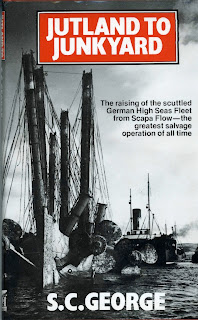 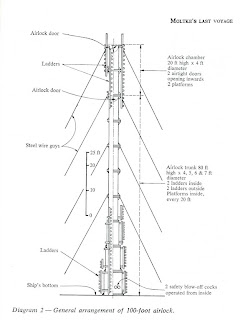