In 1278 an abbot went on a pilgrimage to the Holy Land. Whilst there he visited what was believed to be the site of the crucifixion and collected a jar of soil. He brought this holy soil back to Sedlac, in what is now the Czech Republic, and spread it over the local cemetery. The cemetery began to be regarded as sacred land and many people wished to be buried there. By 1318 over 30,000 bodies were buried in Sedlac cemetery. The Black Death did wonders for trade. In 1511 a monk began collecting bones from the cemetery and placing them in the crypt. 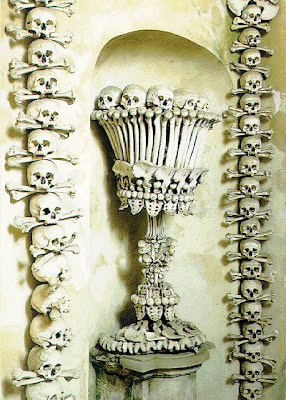 By 1870 there were 40,000 sets of bones in the crypt and a local woodcarver was given the task of decorating the inside of the chapel with human bones. The result is what must be the macabre place in Europe. 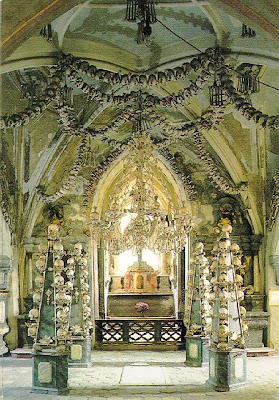 Sedlac is on the outskirts of the Czech town of Kunta Hora. In the 13th century Kunta Hora produced most of Europe’s silver and has many remnants of its prosperous past. Both Sedlac and Kunta Hora have been designated as World Heritage sites by UNESCO.

How did you get this post to post with a future date??? Must be black magic from these bones...! LOL