This is an Addiator; a German manufactured mechanical pocket calculator. They were made from 1920 to 1982. A Frenchman called Troncet produced a similar device and such calculators are sometimes known as Troncets.

Users could add and subtract by moving metal sliders with a stylus. The simplest troncets only did denary [base 10] arithmetic.

The one shown is a pocket model. There were more substantial desktop models.

To overcome this limitation Castell produced an Addiator with a slide rule on its other side. I bought one in an antique shop in Prague many years ago. This was before eBay made collecting such devices much easier [and cheaper].

One variant could handle pounds, shillings and pence. [Before Britain introduced decimal coinage in 1971 there were 20 shillings to the pound and 12 pence to the shilling. To add to the fun there were four farthings to the penny. The pound sterling was a character building currency when it came to mental arithmetic.]

Companies in the USA and Germany produced versions for programmers which could do hexadecimal [base 16] and Octal [base 8] calculations. These are very rare.  Link 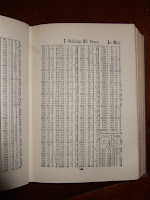 Shopkeepers and tradesmen would not have used addiators. If they had to calculate the cost of seven items at £3/17/6d each they would have turned to a ready reckoner [a book with lists of common calculations].

I have one by me as I type. The calculations were done by a Mr. J Gall Inglis F.R.S.E. and the book was printed by Gall and Inglis of Edinburgh. I suspect they were not only a lot cheaper than Addiators, but also more useful.

Troncets and ready reckoners were gradually displaced by affordable electronic calculators from the mid 1970s onwards.

There must be many people who remember using such devices, but I have never seen them as a prop in an historical film or TV programme.

A couple of points of contention: The company Addiator did not make a slide adder with a slide rule on the back. They sold the rights to do that to Castell. Second, Troncet made a very popular slide adder but his was not the first. He was pre-dated by several other designs.