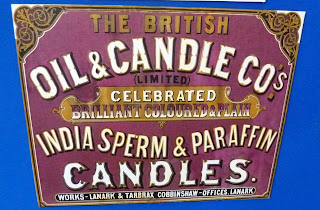 The first candles were made of either animal fats, such as tallow, or beeswax. Animal fat candles didn't give much light and gave off a foul smell. Beeswax candles were much better but were more expensive. In the 18th and 19th centuries, spermaceti, a waxy substance produced by the sperm whale, was used to produce a superior candle that burned longer, brighter and gave off no offensive smell. They are the sperm candles in the poster. (India candles came from India and were were a by product of boiling cinnamon.)

People wanted good quality candles that were affordable and gave off a  clear bright light. Paraffin candles, produced from shale oil, were the answer. They produced a bright light and were much cheaper than the alternatives. They were produced in very large quantities and reduced the financial incentive to hunt whales.

After James 'Paraffin' Young's patent to produce oil from shale expired in 1862 80 to 120  companies started mining shale and refining oil [though probably some of these companies were no more than two men and a wheelbarrow].

The village of Tarbrax was established to house the workers at the adjacent shale mine. It expanded rapidly. 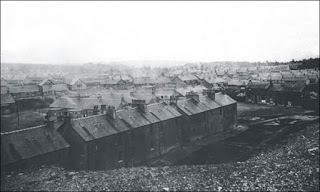 More houses were built later and 1500 men were employed at the site. Oil was taken to Lanark for final refining. The British Oil and Candle Company controlled the mine and the Lanark refinery for a while but over the years they passed though many hands until the industry collapsed, causing much hardship.

There is still a giant shale bing at Tarbrax and many more around central Scotland. The best known are the Five Sisters bings which are visible to anyone travelling between Edinburgh and Glasgow by train.