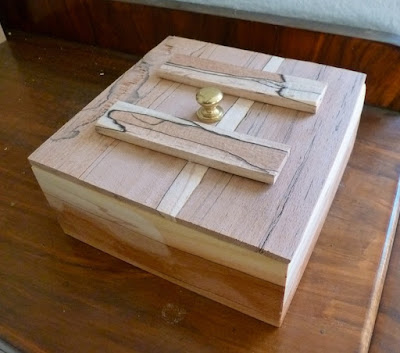 The above box is 150mm square and 65mm high. It is made out of beech, a very common English wood. The wood has not been treated in any way. What you see is just the natural wood.

After the tree died it became infected with fungi which produced the attractive figuring you can see above. Such figured beech is also known as spalted beech.  Decades ago wood merchants could only sell such wood as firewood. Now it is in such demand that cut logs are left in the weeds after been felled in the hope that they wood will become infected and produce spalting.  The process takes 2 to 3 years to reach the ideal stage.


The black lines are created by different species of fungi erecting barriers around their territory! There are primary colonizers who come first and establish territories and then have to defend them against secondary colonizers who are only able to colonize the wood because the primary colonizers have changed the ph of the wood & its structure. If left unchecked eventually the whole tree is consumed by the fungi,  part of nature’s way  of dealing with dead trees.

I only had a small piece of this wood and the lid had to be made by glueing three very thin pieces together. The rectangular reinforcing bars shown loose on the top of the box will be glued to the underside of the lid.

I refer to figured woods as unhappy woods because their attractive figuring is caused by infections [virus or fungi], beetle infestations [ambrosia figuring is caused by fungi entering a tree through the bore holes created by the ambrosia beetle], physical damage [burrs/burls] and stress [the birdseye figuring sometimes found in maple is believed to be produced when a tree has to  compete for sunlight with surrounding trees but is growing in poor soil].

Email ThisBlogThis!Share to TwitterShare to FacebookShare to Pinterest
Labels: wood