What the media reported -

" I saw a headlining story on the BBC about how Donald Trump had tipped a whole box of fish food into a pond full of carp during his trip to Japan, heavily implying he lacked the patience or intelligence to feed them slowly with a spoon as he was supposed to." 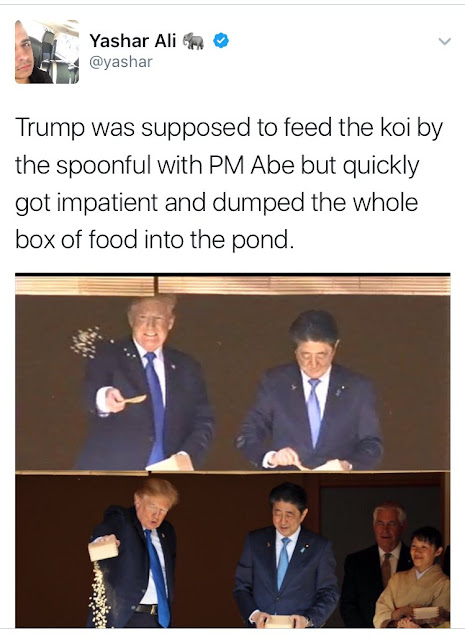 "Moments before, Shinzo Abe threw his entire box into the pond and Trump simply followed suit, and all of this can be seen in the unedited clip. But major news channels like the BBC and CNN decided to go with a carefully edited clip which showed Trump looking foolish, and ran it on their front pages. Someone, somewhere in these organisations are quite deliberately making these decisions, abandoning all pretence of impartiality and accurate reporting."

It is sad to see organisations like the BBC throw away their reputation for impartial reporting. All because the liberal haters want to blackwash Trump and are willing to damage their organisations credibility to indulge their own political prejudices.

Does it not occur to them that all they are doing is proving Trump right when  he contemptuously dismisses their output as fake news.