Culross is a delightful small town on the north bank of the Firth of Forth, just west of Edinburgh. It has many unique historical buildings and is well worth visiting.

It didn't use to be such an attractive place. During the 16th and 17th centuries, the town was a centre for coal mining.  The yellow building below [Culross Palace] was built for  Sir George Bruce of Carnock who was an innovator in coal mining techniques. In 1575 his mine into the Upper Hirst coal seam was the first in the world to extend out under water. Then he built a 240 foot vertical shaft up from the undersea mine  to a platform out in the Firth from where the coal could be loaded into ships.

Sir George Bruce invited James VI to visit the undersea mine. James went down the shaft and then up the vertical shaft to the coal loading platform.  'Alarmed to find himself surrounded by water at the top of the shaft, James accused Sir George of an attempt on his life and declared that the whole affair was an act of treason. It was only when George Bruce pointed out a rowing boat and explained that one could either use that or return by the tunnel from whence they came that James relaxed again.' 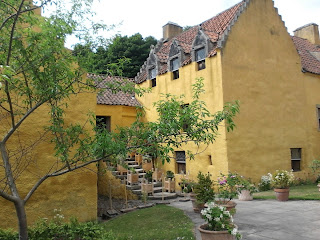 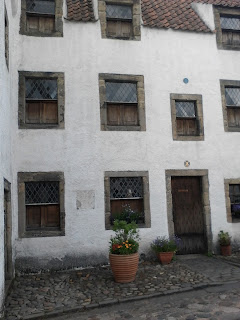 Culross exported coal and salt and the red tiles that roof many buildings are thought to have been brought back as ballast from Holland. 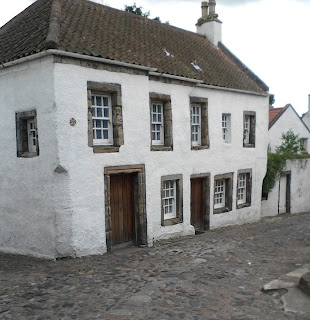 Many of the streets are cobbled. 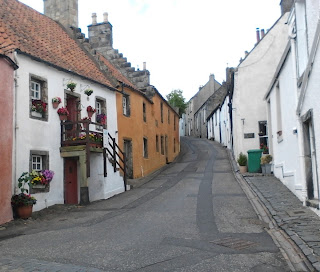 Admiral Thomas Cochrane, whose life and exploits served as a source of inspiration for the naval adventures of C. S. Forester's Horatio Hornblower and Patrick O'Brian's Jack Aubrey, spent much of his early life in Culross. His family had an estate nearby.

On a hill above the town there are the remains of a 13th century Cistercian abbey that visitors can wander around. The abbey is derelict but its church is still in use. It contains a 1642 tomb with alabaster images of Sir George Bruce, Laird of Carnock, his wife, and eight children.


The abbey graveyard holds the grave of a Victoria Cross holder from the Siege of Lucknow [Indian Mutiny].