Like most of the moated manor house estates I have written about, the Brockhampton estate was established by a Norman family, the Brockhamptons,  after the Conquest of 1066. It is first mentioned in the Doomsday Book of 1166. Lower Brockhampton House was built by the Domultons in the late 14th century. The estate passed to the Habington family and remained in their hands for over 400 years.

Lower Brockhampton House is shown at the top of the map below. The house in the centre of the map was built in 1765 and is let to a private tenant by the National Trust. You cannot visit it. 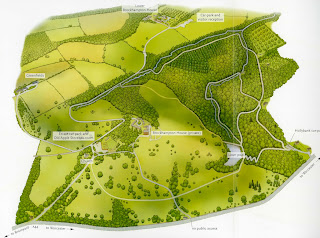 Lower Brockhampton House used to be let to a tenant farmer but has now been restored by the NT and opened to the public.

The house is split into two parts. The timber framed front part is open to visitors and consists of a hall and parlour on the ground floor. On the upper floor is a bedroom and a study. The study is laid out as it would have been when Colonel Lutley lived there. On the wall is a map of the estate in 1737. Then it had many more tenant farmers than the five it has now and a greater variety of crops were grown. A lot of the estate is now woodland and pasture. After you have seen the house you can walk around parts of the estate.

The rear of the house is built of brick and is let to a National Trust employee who acts as caretaker for the house.

The map below shows the moated manor houses for which I have posts. To see the posts click on the houses tag on the right hand side of this page.