Little Moreton Hall is thought to be the best example of a timber framed manor house in England. The oldest parts date back to the early part of the 16th century; though the family lived on this site from the 13th century. Like most of the English [and a good part of the Scottish, see this post]  aristocracy they were of Norman/French stock. After the disaster at Senlac Hill in 1066 the Anglo-Saxon aristocracy were displaced and their lands given to the newcomers from Normandy.

"The Norman conquest was a pivotal event in English history. It largely removed the native ruling class, replacing it with a foreign, French-speaking monarchy, aristocracy, and clerical hierarchy.

William systematically dispossessed English landowners and conferred their property on his continental followers. The Domesday Book meticulously documents the impact of this colossal programme of expropriation, revealing that by 1086 only about 5% of land in England south of the Tees was left in English hands. Even this tiny residue was further diminished in the decades that followed, the elimination of native landholding being most complete in southern parts of the country."

I have made several posts about moated manor houses; most have a similar history to Little Moreton Hall.

The black oak framing looks attractive but the colour comes from a pitch coating which is damaging the wood. When the National Trust has to replace timber they leave the oak unpainted and it matures to a silvery grey colour.  When the house was built the wood would have been silver grey and the panels ochre. 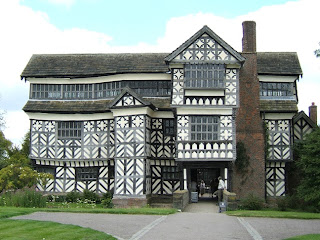 Oak can be as strong and enduring as steel but when they added the third storey to the house the weight was too much. You can see the sagging in the above photograph. The National Trust has had to put in a concealed steel frame to prevent collapse.

The moat at Little Moreton encircles more than the house, unlike Ightham Mote and some other houses I have written about. I suppose valuable stuff, including livestock, could be kept within the moat at night to make theft difficult. 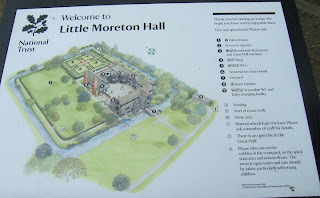 The house has a dog kennel built into a wall but it would only suit a small dog. Compare it with the massive dog kennel at Ightham Moat, another moated manor house.

You can see from the  plan below that the estate had several sources of income apart from farming. There was a marl pit, a corn mill and an iron bloomery.

The floor of the great hall would once have been covered with rushes or 'the thresh'.  To stop the thresh being kicked out of the hall a sill would have been put across the bottom of each door to hold the rushes in place. I was told by a guide that this was the origin of the word 'threshold'.

The top of the great table is a single piece of oak called the 'board'. A guide said that

After a meal the board would be turned over so games could be played - hence board games.

Most of the people around the table would have to sit on stools or benches. Only the lord of the manor would have a chair - hence he would be chairman of the board.

When entertainers came to the hall several boards would be pushed together and the performers would stand on these to give their performance - hence tread the boards.

If you want to read more about Little Moreton Hall the National Trust publishes an excellent guide book. You can get it from Amazon.

I have written several posts about moated manor houses. You can find them by clicking on the 'houses' tag on the right of this page.