The Lord of the Rings films made good use of the spectacular New Zealand landscape and tourists still visit some of the location scenes [especially Hobbiton].

Whilst driving in NZ I came upon the lehar fields around Inglewood and between Okato and  Opunake, a landscape so strange that I am surprised it was never used in the Lord of the Rings.  Maybe it will appear in the Hobbit films. 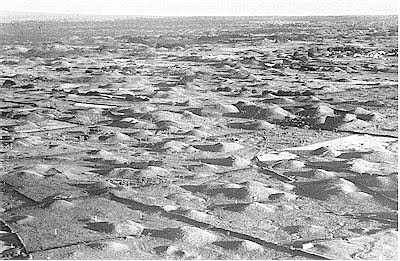 New Zealand is very volcanic and the Taranaki district [the south west] of the North Island is dominated by the volcanic cone of Mount Taranaki. During one of its active periods the volcano threw out gobbets of molten rock which formed what, I think, are called lahar fields. When the lava cooled it formed mounds. Some of these are quite large. We parked next to one that had a two lane road running through it.

Unfortunately, I didn't take any photographs and I have had to rely on the few photographs that are available on the internet. They do not do the lahar fields justice.  The mounds created a very weird landscape and it was easy to imagine the dramatic effect of a moonlit battle or a chase staged in the fields. 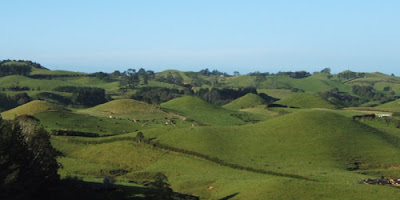 There is very little on the internet about this strange, and perhaps unique, landscape. Maybe I am using the wrong search terms.  If you have any information please add a comment.