What if UK elections were really representative?

After the recent indecisive UK elections there is renewed interest in introducing proportional representation, instead of our present first past the post system [FPP] system.

Under FPP the party which has the most votes in a constituency wins the seat. Votes for other parties are ignored.

What would have happened if we had had a fully representative system and parties would have won seats in the House of Commons according to their share of the national vote?

To answer that question I got out my trusty spreadsheet and produced the table below.

Column A shows the parties and column B the number of votes they received.

Column D shows the number of seats they have received under our present FPP system.  Just a glance shows that there is a weak relationship between votes and seats.  For example, compare Labour and the Liberal Democrats.

The United Kingdom Independence Party [UKIP] got over 900,000 votes but didn't get a single seat. The British National Party [BNP] got more votes than the Scottish National Party, but the SNP got six seats and the BNP didn't get any. The Green Party got one seat, but it received more votes than the next four parties in the table [all from Northern Ireland].  How did the Democratic and Unionist Part [DUP] get eight seats with only 168,216 votes?

Column G shows the number of seats each party would have received under a fully representative system.  The Liberal Democrats would gain the most from such a system, which is obviously why they are keen on PR.  Note that UKIP would get twenty seats and the BNP 12. Both the  SNP and the Greens would get an extra five seats.

Column H is the difference between D and G.  The Conservatives would lose 71 seats under a proportional system, and Labour would lose 69. 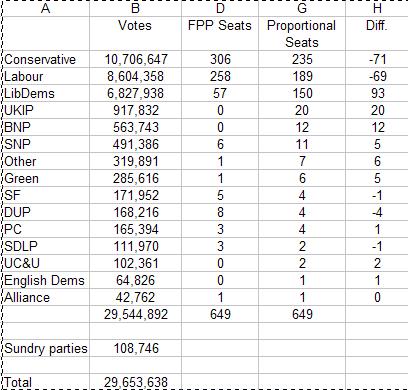