Cycle routes, canyons and Tibetan bridges in the Dolomites


During a rare browsing session in a  bookstore I noticed that Lonely Planet has published a book on cycling in Italy.  I picked it up and turned to the section on the Dolomites, not expecting to find very much.  I often visit Italy, and particularly the Dolomites.  There are a lot of cyclists in the Dolomites. There are also a lot of very steep hills.

However, the book mentioned a 40 mile off road route that ran between Bolzano and Trento. The path ran alongside the Adige River and was described as being almost completely flat. I later found that the Bolzano to Trento route is part of a longer path that starts further north and runs south all the way to Venice. I also found that there is a frequent train service between Bolzan and Trento so getting back to ones starting point would not be a problem.

A bit of Googling led me to Bob Lucky's Biking Page. This is a superb resource. Bob has a complete description of the route with lots of photographs. 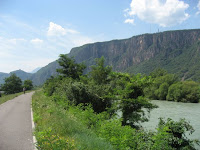 His site also has descriptions of some other routes, including a section of the Danube Bike Path from Passau to Vienna.  I have done part of the route and it is a superb ride.

A bit more Googling about the Dolomites led me to this site and a mention of the  Bletterbach Canyon Geoparc.  This is an eight kilometre long walk through a deep canyon. The attraction is the remarkable geological formations that can be seen along the walk. The official site is here. 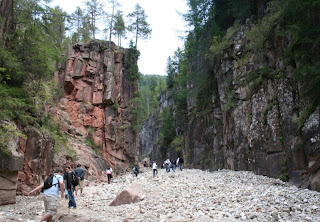 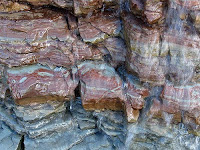 The same site mention the Tibetan Bridge at Claviere.  This is a 468 metre bridge that runs over the San Gervasio Gorge. You can get a flavour of it from the photograph, The official site is here and there is also an amateur video. 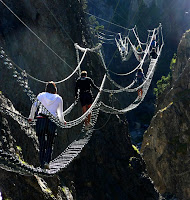 The final place I found  was the town of Sabbioneta. It has been described it as 'Italy's perfect town'. From the photograph it looks as if it is in a star fort. I like visiting star forts so I have also added Sabbioneta to my geographical ToDo list. 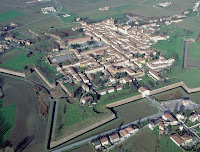 Though I have often visited the area I had never heard of any of the above. Now that I have I plan to visit them when I am next in Italy.

Just one suggestion if you ride the cycling path from Bolzano to Trento, do it in the morning. In the afternoon you get such a head wind that it is like to climb a Dolomites pass :-)

So the best is to ride in the morning from Bolzano to Trento and in the afternoon ride north with a huge tail wind.

Greetings from the Dolomites.

Bob Lucky mentions a head wind in his article but I had not realised it was a constant. Thanks for the very useful information.