The tallest building in Estonia 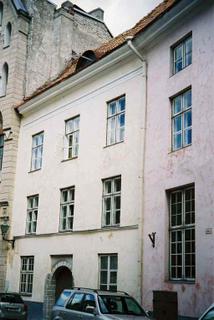 During the Soviet occupation of this building was the headquarters of the secret police in Tallin. Prisoners were kept in its cellars. It was known as the tallest building in because, it was said, you could see from its basement.


It’s a small building so I don’t think they could have had many prisoners. Unless they were running a hot bed operation and had a hourly bus service to the Gulag Archipelago.
It was the same in . I went round the secret police headquarters there [you see my tastes] and they had a torture chamber and some of the Evil Empire stuff. However, they only had half a dozen cells, and you probably had to make an advance booking to have your fingernails removed.
The old city in is a world heritage site and well worth a visit. It is catching on as a tourist destination and the British stag and hen parties have already started to appear. From it is easy to visit [two hours by boat] and [four hours by coach].
The newer part of has lots of posh new skyscrapers and people look very prosperous. There is a big shopping mall in the centre and I was amazed by the quality of goods that were on sale, and how well everybody was dressed. I wish we had somewhere as good in . The Estonians seem to be doing very well for themselves; though, perhaps, not everybody is sharing in the new prosperity. I took a bus tour outside and we went through this vast Soviet era housing estate that looked awfully bleak. If you had to live there then the prospect of being sent to probably didn’t seem so bad.