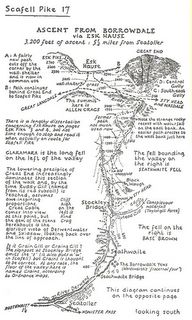 The Lake District is in the North-West of England. It is a very scenic area with lots of fells [hills] that are popular with walkers. Alfred Wainwright wrote a series of beautifully illustrated guides for fell walkers. As you can see from the image above, not only are the maps hand drawn, but the text is hand lettered.

Wainwright died in 1991 and his guides are now being brought up to date by Chris Jesty. ["The routes of paths have changed, lots of walls have fallen down and when Wainwright was travelling to the fells he used public transport so car parks weren't important to him," said Mr Jesty, a former taxi driver who trained in cartography with Ordnance Survey. One relatively brief and simple scramble up Clough Head, which takes only a page in the first new volume, has 30 pieces of "invisible mending", from minor deviations in the route to vanished walls.]

Wainwright also devised a coast to coast [C2C] walk which runs 190 miles across England from St Bees Head to Robin Hoods Bay. I have a copy of Wainwrights book on the C2C, which I bought in 1984, and it was on its 26th printing by then. The Ordinance Survey also publish two maps on the route [Outdoor Leisure maps 33 and 34].

There is also a C2C cycle route of 140 miles which runs from Whitehaven in the Lake District to Newcastle. Sustrans sell a map of the route. BTW Sustrans is a UK organisation which is busy creating a network of footpaths and cycle paths across the UK. If you are planning any long distance walking or cycling in the Uk it is well worth consulting their web site.