Scapa Flow is a natural harbour in the Orkneys, a group of islands to the north of the UK mainland.

During both world wars it was the main anchorage for the British Fleet. After the First World War over 70 ships of the German High Seas Fleet was scuttled there. 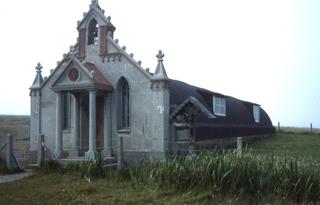 During the Second World War a group of Italian prisoners of war, who were held in Camp 60 overlooking Scapa Flow, converted an army Nissen hut to a chapel. In the first photograph you can see the corrugated metal hut behind the stone front built by the prisoners. The other two photographs show the stunning interior of the chapel. 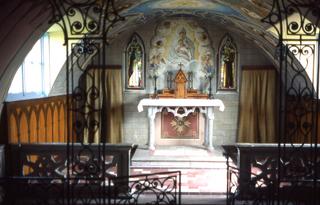 Domenico Chiocchetti, who was the person responsible for the interior,
returned to Scapa Flow about twenty years after the end of the war with his two sons and repainted the plasterwork. I took these photographs when I visited the Orkneys to dive some of the World War I German battleships that were sunk in Scapa Flow. 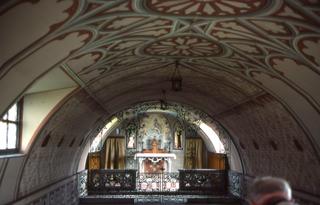 The Orkneys are well worth a visit. In addition to being able to dive the wrecks of the German fleet there is a 4,000 year old village, a tomb with Viking graffiti inside, stone circles and lots of other stuff.