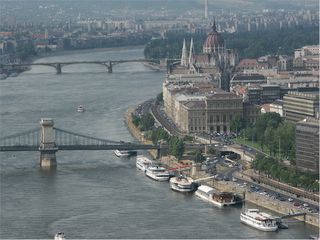 I have just come back from a few days in Budapest. Now that everybody has done Prague and the Czechs are getting a little jaded with tourists, the travel industry sees Budapest as the new hot spot. Easyjet is sending three planes a day from the UK, and another three or four from other European cities. There are lots of Brits around the city, and a lot of Germans. There are not many Americans. I suppose they cannot afford Europe anymore.

There is a lot to see in Budapest and it is easy to get around the city, and out to surrounding towns. Budapest has more public transport than any other city I have visited. There are three subway lines, buses, trolley buses, an excellent airport to hotel minibus service, trams and a rail network. You can buy a Budapest Card which allows free use of public transport in the city and free, or discounted, access to many museums. I bought one but did not get my money back and would have been better just buying books of single trip tickets. Even with all this public transport too many people bring their cars into Budapest. They need to cut back on this before cars ruin Budapest in the same way they ruined Paris. It would also be a good idea to stop people parking on pavements.

There are lots of museums; including a terror museum and a marzipan museum. Budapest also has lots of great buildings, including some fantastic art deco creations. The parliament building is huge and impressive. I suspect we could have built something like theirs for the Scottish Parliament for less than the £500 million that we finished up paying. 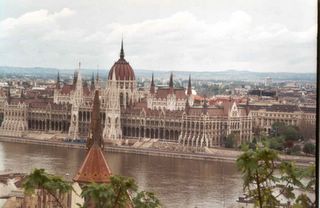 Language is not a problem since nearly every Hungarian I came in contact with spoke English, sometimes very good English. They seem to be very keen on the EU and one can understand why. BTW - it is clear that Europe has a de facto second language, and, to the chagrin of the French, it is English. I listened to a group consisting of a French woman, some Germans and two Hungarians talking in English since that was the only language they had in common. You can hear this happening all over Europe. It takes a lot of effort to learn a second language and English is the choice for most people because it provides by far the best return on the investment.

Ominously, there were some hen and stag parties on the plane, though fortunately not in the numbers that have infested Prague. Try and see Budapest before the drunken yobs disillusion the Hungarians about tourism.

It's always good to read other people's observations about a city I love. There were a lot of things you mentioned that I would want to underline.

One being that there will be two more metros being built over the nextfew years, one of them going straight from the airport to Nyugati station (designed by the Eiffel company of Paris fame - and the one in Lisbon). So the public trasport is set to get even better.

I'm also worried about how the Stag and Hen parties will hit the city. Then again, the Hungarians are pretty wise, they've been watching their neighbours and kow how to deal with trouble - you can't even drink a drop of alcohol here and drive.

p.s. I run a blog on Central Budapest which explains my interest in your article. I'm off for a scout around the rest of your blog now...