During the Cold War the East Germans put a barrier through Berlin [and all along the border] to stop people 'escaping' to the West.

Here we have a photo of an East German soldier jumping the wire. 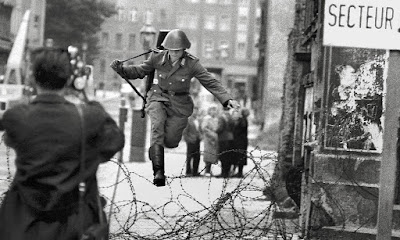 It was all clear evidence of how bad life must be over there and how cruel the regime.  We were told that very few people managed to escape and only at serious risk to their lives since the East German border guards would shoot at anybody trying to cross the Wall.

That was all a lie. People were crossing the border by the bus load.

People were also traded for commodities such as coffee, copper and oil.   However, neither side wanted the public to find out - the GDR because it didn't want to appear weak and West Germany because it didn't want to be seen supporting the communist regime.   So the operation remained clandestine - people were traded in darkened nooks of the underground railway, the U-Bahn, or sent across the border in buses with revolving license plates. The number plates would switch at the checkpoints, so as not to arouse suspicion on the other side.

So, no need to tunnel under the wall or cut your way through the wire. All that was needed was money.

The truth is revealed 40 years later. It makes me wonder what lies we are currently being told.