Car burning - the next bad thing

A few years ago there were riots in the suburbs of Paris and press reports mentioned that the rioters were burning hundreds of cars a night. There was nothing in the press about how this was being done. It is not easy to set fire to a car. What were the rioters doing? Breaking windows and pouring in petrol? Lockable filler caps would surely prevent rags being stuffed in the tanks and set on fire. 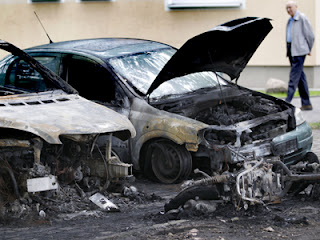 Recently car burning has spread to Berlin and the Economist has had a couple of articles on the phenomenon.

The Economist explains how it is being done. It is depressingly easy. The car burners just put a fire lighter against the tyre next to the petrol tank, strike a light and then walk away.  Very hard to stop or catch the culprit.

The UK's genetic residue do not appear to have discovered this yet, but they will.  Look forward to a big rise in insurance premiums when they do.

Email ThisBlogThis!Share to TwitterShare to FacebookShare to Pinterest
Labels: snippet