The grave of the lords of the seas

This 1948 photograph shows the WW2 Royal Navy battleships Rodney, Nelson and Royal Sovereign being broken up for scrap in Ward's yard at Inverkeithing. The Rodney is already partly dismantled. 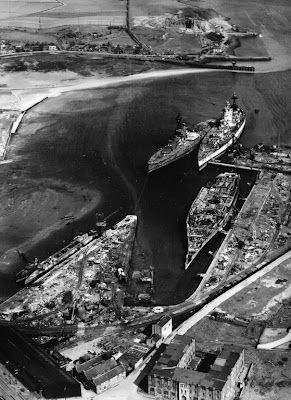 HMS Rodney was the seventh ship to be named for Admiral Sir George  Rodney. The ship had a displacement of 41,000 tons and a complement of over 1,600.

She had a distinguished career. She took part in the hunt for the Bismark, firing at short range into the German ship. Later, Rodney was  with Force H in Gibraltar, escorting convoys to Malta.  After a  refit, she returned to Force H, where she again escorted Malta convoys and took part in Operation Torch, the invasion of Northwest Africa. Later, she was involved with landings in Sicily and Salerno. 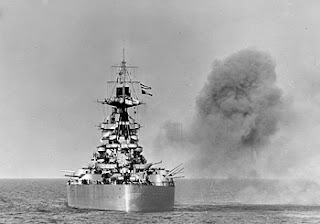 From October 1943, she was in the Home Fleet, and took part in the Normandy invasion in June 1944, destroying targets at Caen and Alderney. In September 1944, she performed escort duties with a Murmansk convoy.

Her sister ship, HMS Nelson, seems to have mainly served as a target for the enemy, doing very little damage in return. She was hit once by submarine launched torpedoes and once by air launched torpedoes. She also twice hit mines. She spent a lot of time being repaired.


We have kept very few of our Royal Navy ships. Very little remains to show we were once lords of the seas. The light cruiser HMS Belfast is moored in the Thames, but we did not keep any battleships. What a pity and what a tourist attraction they would be now.

The main photograph is from the superb Cowley, D.C. & Crawford, J., 2009. Above Scotland: The National Collection of Aerial Photography, Royal Commission on the Ancient and Historical Monuments of Scotland (RCAHMS). See my earlier posts on this book.

My grandad was CPO on the Rodney.