Will Theresa May become ACPO's bitch? 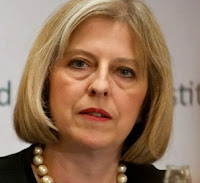 Teresa May is the UK's Home Secretary. ACPO is the The Association of Chief Police Officers of England, Wales and Northern Ireland.  It is the trade union and lobby group for our senior woodentops.

During the Labour years ACPO got to do pretty much what it wanted and, as a consequence it got far too big for its boots. Labour Home Secretaries were all too willing to kneel and kiss the ACPO ring. Very often it seemed that the ACPO tail was wagging the government dog.

If the police wanted more powers then all they had to do was send a list around to the Home Office. The deal seems to have been that the police could have whatever they wanted [and what greedy little piggies they were] and in return they promised not to leak information to the press and produce outraged headlines in the Daily Mail.

In the past the Conservative Party has taken a more robust line with the police. They have liked to keep them in their place. That is as it should be. The government is elected. ACPO is not.

The question now is; will Theresa May stand up to the woodentops, or is she going to become their bitch. I see they are trying her out already with requests for a replacement for Section 44 powers.. If she shows any signs of resistance to their demands the full scaremongering tactics will be employed. Terrorists will be everywhere. If they actually do anything it will be Therasa's fault for not giving the police the power to shoot suspects on sight.

If she wants to show that she is not going to be kneeling before ACPO she might start by cutting them back a bit. A review of Home Office grants is long overdue.

Curiously enough, ACPO is a private limited company. It is funded by Home Office grants, profits from commercial activities and contributions from the 44 UK police authorities.

Some of its ways in which it spends government money seem rather questionable. In 2010 it emerged that ACPO was spending £1.6M per year from government anti-terrorist funding grants on renting up to 80 apartments in the centre of London. These were reported as being empty most of the time.

Let us see if Theresa can stand up to the ACPO test.