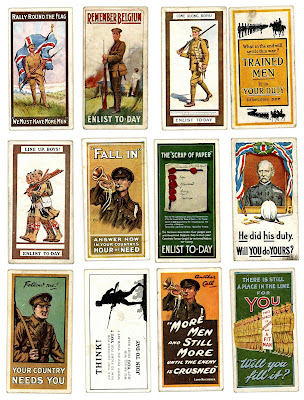 This set of twelve cigarette cards was issued in 1915 by W D and H O Wills Cigarettes. They are reproductions of World War One recruiting posters. A complete set of the cards is rarely found and commands a high price. The white card is particularly hard to find.

Such cards were produced as a way of increasing cigarette sales. Each packet of cigarettes would contain one card, and small boys would attempt to build complete sets. Most sets contained 25 or 50 cards, and a lot of trading was required to complete a set.

The cards were often very well drawn, and reflect the preoccupations of the day. I have a set of cards from 1938 that deal with air raid precautions. At that time there was a great fear of gas bombs, and over half the cards deal with anti-gas precautions. At the time it was thought that the Germans would use gas against British cities, possibly causing millions of casualties. 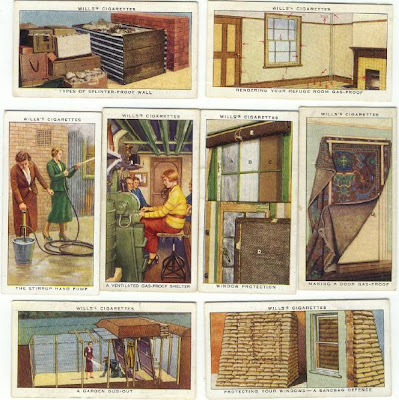 Todd HellsKitchen said...
This comment has been removed by a blog administrator.
8:46 pm