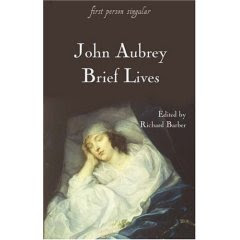 One of my favourite books is Aubrey's Brief Lives. John Aubrey was born in 1626 and his book is a series of short essays about prominent figures of his time. His memoirs are often scandalous, gossipy, startling and funny. They are always very readable.

For example, in his memoir of John Colet he mentions that Colet was buried in a lead coffin and the coffin was filled with liquor to preserve the body. After the Great Fire of London someone made a small hole in the lid of the coffin and a Mr Wyld and a Mr Greatorex sampled the liquid and gave their opinion on its taste.

One of his best quotes is about himself. He confesses that he wanted patience for knotty studies'. Me too.