There are lots of dangerous underwater creatures. The most dangerous is not the shark, as most people imagine. I have dived with sharks many times, and never had the slightest problem. I've even touched several sharks. Probably the riskiest encounter I ever had with a shark was during a night dive in the Red Sea. When we got out of the water my buddy told me that during the dive he had shone his torch behind us, and seen that we were being followed by a large shark. The consoling thought about that was that it would probably have taken him first.

Sea snakes are supposed to be six times as poisonous as the most venomous land snake. Yet we very rarely hear of anybody being bitten by a sea snake. I've dive with them several times and really enjoyed the experience. I once went on an expedition to the Swain Reefs, off Australia, specifically to dive with sea snakes. They're very curious creatures and will come up to you to see what you are and will twist themselves around your body. As long as you don't panic and try and strike out at them there's no cause for anxiety.

The really dangerous underwater creatures are the small and poisonous. Once when I was diving in the Red Sea I was just about to touch a piece of the reef when a passing Israeli diver stopped me. I had just been about to put my ungloved hand on an extremely well camouflaged and extremely poisonous stonefish. If I had touched the stonefish I would've been lucky to have survived.

The crowd of thorns star fish destroys coral reefs. They're been spreading through the barrier reef for many years and they leave devastated areas of white coral in their wake. I used to have the habit of stabbing them with my dive knife whenever I saw them. That stopped when I got a bit of thorn in my finger and was quite ill for several days. I was lucky, I heard of somebody who had to be airlifted off a dive boat to an Australian hospital after they had the same kind of accident.

Even seashells can be dangerous. The 5 inch long geography cone has killed well over a dozen people. I've collected seashells from various places around the world and one of the specimens I have is a textile cone. Once, when I was visiting the Red Sea, someone picked up one of these cones on a beach and put it in in the pocket of his shorts. The creature inside was still alive and bit him through his clothing. He died within 24 hours.

I once had a chance to dive in a lake that had a crocodile in it. I have always been a bit wary about crocodile and wasn't entirely sorry when the expedition was canceled at the last minute when somebody had an accident. 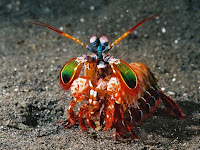 Neville Coleman, the Australian diver, has published an interesting book called Hazardous Sea Creatures. This lists all the worlds dangerous marine life. My favourite is the mantis shrimp, also known as the thumbsplitter. To quote Neville's book "the shrimp's claws are normally carried at the ready folder to beneath the shrimp's head. When hunting, or when defending, these claws can be shot at with extraordinary power and speed, and the been known to crack aquarium glass. They should only be handled if you're wearing heavy duty gloves."

Anonymous said...
This comment has been removed by a blog administrator.
10:07 pm

Wow! What great adventures you have had. Great pictures too. Keep up the good work.