On the Otago Rail Trail 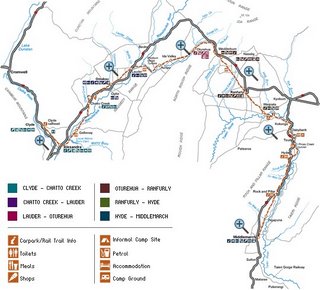 The Otago Rail Trail is a 150 kilometre cycling track in the South Island of New Zealand. It runs between the small towns of Middlemarch and Clyde, and follows the route of the old Otago Central Branch railway line. The line closed in 1990 and was reopened in 2000 as a long distance cycle track. Because it is a former railway line the track is pretty flat, only rising by 400 metres at its mid point when it crosses the Rough Ridge mountain range. 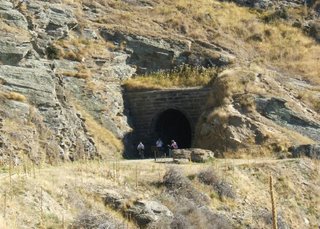 The track is very well maintained and it is a nice ride. Someone who was pushing it could complete the 150 km in two days. Some people do the complete distance in one day. There are 68 bridges and two long tunnels to add variety. The Trail is very popular. Perhaps it is too popular for the area, which has very little accommodation and few cafes or shops. We passed some large organised parties with road support, and some people towing their camping gear behind their bikes in little trailers. 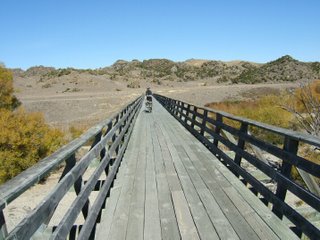 We only had one day so we hired bikes from a shop in Alexandra and paid them to transport us to a point 50km from Alexandra and then we cycled back. The bikes were not ideal, and I wished I had had my own mountain bike. The frames were heavy and the tyre treads too deep. Deep treads are ideal if you are on wet muddy tracks, but on the Rail Trail they were not necessary. On a relatively even surface like the Trail a shallow tread runs better and requires less effort.

This part of the South Island was the home of the Riders of Rohan in the Lord of the Rings film. The Rohan villages were built nearby. The area looks pretty barren in the photographs, but, in fact, there are quite a lot of trees in some parts. We were told they were no trees at all when the first European settlers arrived, and all the trees that are there now were planted by the settlers. There are a lot of Lombardy Poplars and they looked spectacular with their golden autumn leaves. Willows also seemed to grow very well here. 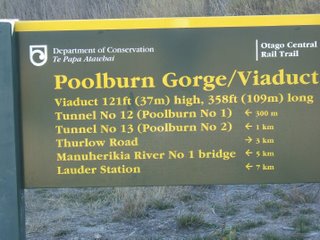 The Otago Central Rail Trail Charitable Trust administers the Trail. It has an excellent website and publishes and very useful leaflet which provides information on the route, and advertisements for businesses providing services to users of the Trail. 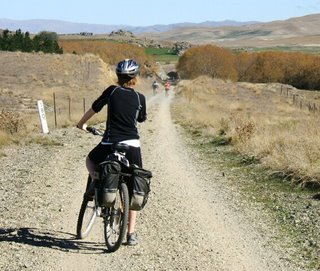