Germany v USA - who to emulate? 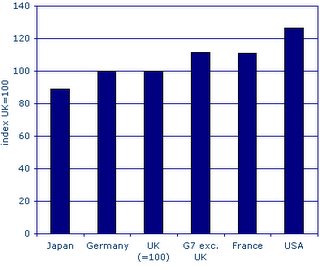 The chart shows the GDP per worker statistics from the Office of National Statistics. Strange, I thought the UK was the dynamic, productive economy and France was full of lazy cheese eating Frogs. The chart shows GDP per worker and not GDP per hour. It does not take account of the longer working hours and shorter holdays of American workers. In fact, the statistics show that the output per hour of French workers is higher than that of workers in the USA.

It is curious how statistics and media spin often conflict. In the UK we are told we should emulate the economic practices of the USA, and shun those of our European partners. Let us see if the statistics support that thesis that the US model is better.

One test of the merits of a national economic model must be whether it produces goods and services that other countries want to buy. Let us compare the $1.016 trillion exports of tired 'old Europe' Germany with the $927 billion exports of the dynamic capitalist economy of the USA. [my source is CIA factbook]

Germany has a population of 82 million; the USA has one of 295 million. If you do the arithmetic you can see that the Germans are exporting about four times as much per head of population.

The United States is the Greatest Nation on Earth! Just don't ask me to be too specific...