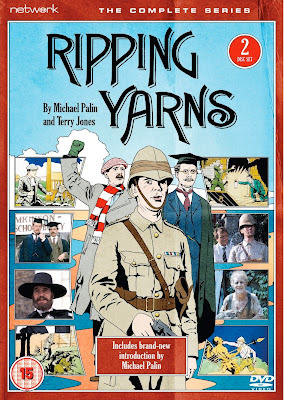 Back in 1976, after leaving the Pythons and before he became the BBC’s Traveller in Residence, Michael Palin teamed up with Terry Jones to do a series of half hour shows for the BBC.

The first of these was Tomkinson’s Schooldays, a send up of Tom Brown’s Schooldays. This was so good that the BBC commissioned a series. Another eight episodes followed, including Across the Andes by Frog, The Curse of the Claw and Roger of the Raj. These were all parodies of the stiff upper lip boy’s adventure stories of the 1930s.

Fortunately the BBC recorded the series on good quality stock and with high production values so the Yarns are still very viewable. The series acquired a cult following; so much so that when the DVDs were out of print boxed sets were being sold for over £150 on eBay.

All the episodes have been digitally restored and the DVDs reissued as a boxed set with lots of extras. These include a booklet giving all the background on the series, pdf copies of the original scripts and a documentary about Palin’s comic roots.

Palin stars in all the episodes, playing everything from a schoolboy to a murderous psychopath. All the episodes are good and Tomkinson’s Schooldays is a comedy classic. If you like the Python style of humour you will enjoy the Ripping Yarns.

SPAM-A-LOT is coming to Broadway soon. I'm looking forward to it!

Have a great weekend!

I'll definitely be looking out for the DVD box set - I have fond memories of the Ripping Yarns on TV. You reminded me of one of my favourite Python moments, in "The Meaning of Life"...

I liked the stoning scene in The Life of Brian.